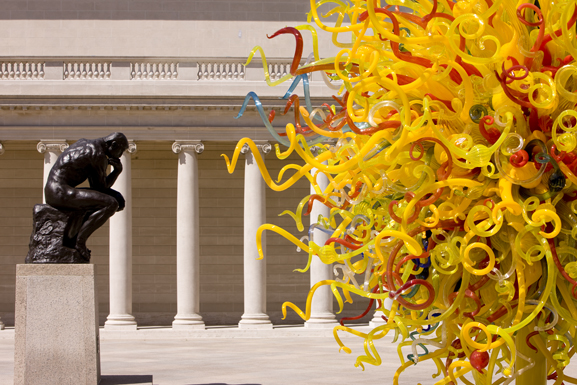 A Breath of Fresh Air

As the sun begins to burn off the fog shrouding the Herzog and de Meuron-designed museum, the newly installed saffron tower of neon in front of the museum casts a curious shadow on a slow-moving, serpentine column of people stretching a football field in length. Lined up as if in the queue for a Springsteen concert, these patient ticket holders are standing there to catch their first glimpse of new work by Mr. Chihuly, a living artist. For the art world, this is an occurrence that has rarely happened before—in California or anywhere else for that matter—and will likely not happen again for a long time.

Chihuly’s path to the de Young is not a story about overnight success. Rather, it is a complicated and determined set of circumstances that has been brewing for years like an underground volcano about to burst.

As a young boy in his basement laboratory, Chihuly realized the magical powers and expressive potential of blowing a small air bubble through a metal pipe to create an awkward, transparent form. While not the pipe’s inventor—historians claim it has been around since the Phoenicians somehow tripped over it shortly before the birth of Christ—the young innovator took the tool to new levels. And, like Jackson Pollock and Andy Warhol, Chihuly was able to keep a tight-fisted grasp on his new discovery and wisely used its unique properties as a catalyst to transform his medium of choice.

As his reputation grew, Chihuly began to attract not only the attention of prominent, big-name collectors like Bill Gates and Robin Williams, but also the regard of a number of artists who were themselves collectors—names like Warhol and David Hockney. Museums from the Metropolitan to the Whitney matched the enthusiasm of private collectors by investing heavily in Chihuly’s work. Now, thanks to Chihuly and the attraction that his medium has had on a revolutionary wave of innovative artists, glass has become an accepted and remarkable medium that is now a recognized international language.

Anyone who seriously examined the bursting color combinations or organic forms on display at the de Young this summer could see that,, beyond his medium, what sets Chihuly aside from the others is that which he chooses to so prominently depict: forms recalling nature. This line of influence can be traced back directly to the artist’s childhood, when his mother, a passionate gardener, excelled at creating flower gardens that would bloom annually into a large, vividly colorful, and inspirational “installation” around the front porch of his Tacoma home. It was this daily subliminal dose of parental guidance and visual perspective that constantly exposed the boy to the stark beauty of the natural world in all its glory.

To top off the lazy afternoons, Chihuly’s mother would announce like clockwork that it was time to run up the hill with his brother to savor the brilliant sunsets amplified by the clear skies and mirror-like surface of Puget Sound. These regular childhood experiences had an indelible influence on the artist’s keen interest in the effects of natural and artificial light—the same intense light, albeit slightly more dramatic, that streamed through the massive installations and individual objects of the de Young’s black-painted galleries.

And, growing up in the Pacific Northwest, Chihuly was constantly surrounded by the mighty multitude of Washington State trees topped off by the omnipresent Mount Rainier. So it was no accident that the lead installation of the de Young show was Glass Forest, a collection of work that echoes his childhood surroundings. In this stunning and mystifying installation, a haphazard grove of vertical alien forms seems to shoot up from a glowing pod of energy that pushes the thin forms heavenward. Here the translucent shapes seem to precariously balance themselves against each other, while the bending glass tentacles meander independently into foreboding territory.

As this and other works at the de Young so vividly show, Chihuly’s environmental surroundings—particularly with respect to the importance of water—continue to play an important role in shaping the visual aroma of the artist’s palette.

And nowhere does this palette pervade more than at the artist’s own home in Seattle, Washington. This vintage, sprawling structure on the east side of Lake Union both draws in dazzling light on a daily basis and absorbs the vibrancy of the moving water that surrounds it, all while seeming to insulate the artist with tranquility and privacy.

Here, Chihuly has fashioned for his own living environment a beautiful hybrid of compositions that displays with a curator’s eye an enticing mix and match of his collections. Influence from Chihuly’s oft-celebrated Seaform series is apparent in the ceiling of glass that brilliantly conveys the look of a body of water as viewed from below. Incorporated into this ceiling installation are mementos from the artist’s youth—worn beach glass, fragments of large shells, and a flotilla of other objects the young Chihuly found while exploring the shore—that intermingle with two small boats filled with wondrous objects and colorful circular floats.

More interested in amassing compilations of vintage utilitarian designs and traditional crafts—he owns the world’s largest collection of Pendleton Indian blankets—than employing items with a comfortable common denominator, Chihuly offers a fresh take on art and living, reminding and reinforcing that the two parts are interchangeable and inseparable subjects that continue to enrich all of our lives, sharpen our focus and delight our many senses.

California Winemasters – Masters of Giving Back