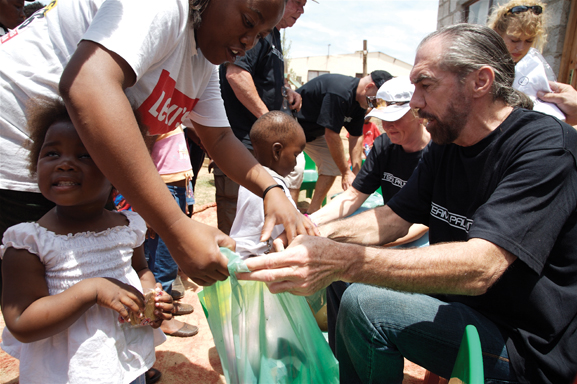 According to Forbes, DeJoria is worth $4 billion—not bad for a man who came from “absolutely nothing.” DeJoria was born in the Echo Park neighborhood of Los Angeles in 1944 to an immigrant family of little means. When his single mother proved unable to support her children, they were sent to an East Los Angeles foster home. DeJoria spent time in the navy and did a number of odd jobs before starting John Paul Mitchell Systems at age 36.

As he explains, it wasn’t easy to get his venture off the ground. “I slept in my car for a time—there simply wasn’t any money,” he reveals. “A backer never came through. It took two years just to pay the bills on time—not calling someone to have to beg for two or three more days, not pay the bills off, but just pay the bills on time. After we could do that, we knew we were going to be okay.”

Today, DeJoria feels extremely fortunate to have the success he has had. “To come from absolutely nothing and have the world be so good to you, we give,” he says. Determined to make a difference, DeJoria currently gives to over thirty major philanthropic interests every year, employing his motto “success unshared is failure.”

He is a sponsor of Children’s Hospital Los Angeles and supporter of MINESEEKER, a UK-based non-profit devoted to battling the problem of landmines. Through Food4Africa, DeJoria sponsors thousands of meals for orphans affected by AIDS. Says the philanthropist, “I give lectures to the homeless, teach them how to get jobs.”

On the arts front, DeJoria has donated generously to the Austin Arts Center, Nevada School of the Arts, and Arte de Mexico, a “program that teaches kids in deprived areas how to be artists instead of joining gangs,” says DeJoria.

It all started with John Paul Mitchell Systems, the ubiquitous beauty company encompassing a chain of well-respected beauty schools as well as a line of hair products. As the master of hair states, “Our aim is to create the best environment for the people who want to enter the industry, showing them how to be a great hairstylist, cutter and business person and to provide the best products.” This year, the schools’ attendance will be close to 20,000 students.

Because DeJoria feels that “corporations can and should change the world for the better,” his own company espouses a firm commitment to caring for the earth. Products are available only in salons or Paul Mitchell Schools and are not tested on animals. “We were the first ones who went to the media and said, ‘you don’t have to test on animals. Ingredients have been tested for years on everything you can imagine, and you don’t need to test on animals.’” he says. “We test it on ourselves!”

Botanicals are harvested on the company’s organic solar powered awapuhi farm in Hawaii. The company plants trees through the non-profit American Forests to offset all carbon emissions associated with the manufacture and distribution of the Tea Tree brand and further donates to reforest throughout the country and around the world through the organization’s Global ReLeaf program. DeJoria exclaims, “I love what I’m doing. I don’t want to retire.”