David Walsh, the owner of Mona who built a fortune on gambling, is applying game theory to his museum’s Covid-19 strategy. Good chess players ‘prepare for the best move their opponent can make’, he said after shutting the museum’s doors.

People need entertainment, however, as Walsh himself acknowledged. So Tim Steiner, the former tattoo-parlour manager from Zürich who offered his back as a living canvas to the Belgian artist Wim Delvoye, will continue to sit on his plinth, topless and in silence, inside the empty museum. It’s part of the Delvoye exhibition, Tim, which runs until 30 April and is now entirely online.

You can live stream Tim in action from Mona’s website Wednesday to Monday, 10am to 4.30pm Australian time. After Tim dies, the tattoo of the Madonna and a skull will be removed and handed over to a German collector who reportedly paid €150,000 for the work in 2008.

Mona’s blog is also full of fascinating reads such as Ai Weiwei’s interview about the 2018 refugee crisis and Walsh’s weekly Covid-19 Diary, in which he shares the museum’s latest news, his fascinating statistician’s approach to virus control, and pictures drawn by his children. 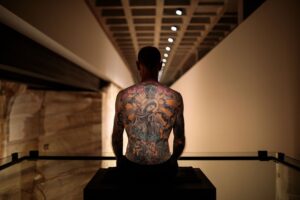