Text description provided by the architects. SNOW ARCHITEKTUR in Innsbruck (Tyrol) is focusing on individuality and design and wants to create a special atmosphere for every project. This philosophy was also implemented for the addition of another story to a detached house in Tyrol. The owners of the house have a personal connection to the Tyrolean mountains, which was an initial part of the conceptualization of the project.

They see the mountains as their second home and wanted to create a shape that broadcasts the special bond to the Alps as well as includes botanical aspects. The central thought of the project is to provide the way to a summit cross which can be seen in the shape of the roof and the surface of the façade. Therefore, the shape was constructed in a way that provides tremendous views from each direction – just as if you were enjoying the view from the summit cross of an alpine mountain. The contours of the roof are creating a free form that offers a dynamic look for the whole project.

The façade was divided into two parts to strengthen the edgy structure of the roof. Moreover, it was aimed to leave the overall shape as clear and extensive as possible. Also, the windows play an important role in the conceptualization. They were placed according to the roof construction and offer a modern and strong line, including the relevant sight protection.

The interior design is focused on reduced forms and high-class materials, with some discreet highlights that emphasize on the calm and clear structure. The overall concept is quite open, with furniture boxes giving some clear lines, without interrupting the flow of the interior concept. The retro timber rafters on the ceiling create a visual contrast to the clean design of the interior. The light concept is another highlight of the project, as it lies between the wood rafters and was developed to spread the light evenly across the most important areas

Natural and untreated resources had an important factor to create a natural and regional atmosphere. A special highlight is the “Stube”, which is a traditional living room in Austria. It creates some more engagement in the area of Tyrol. Such traditional details, combined with modern aspects unite both, modern design and traditional comfort. 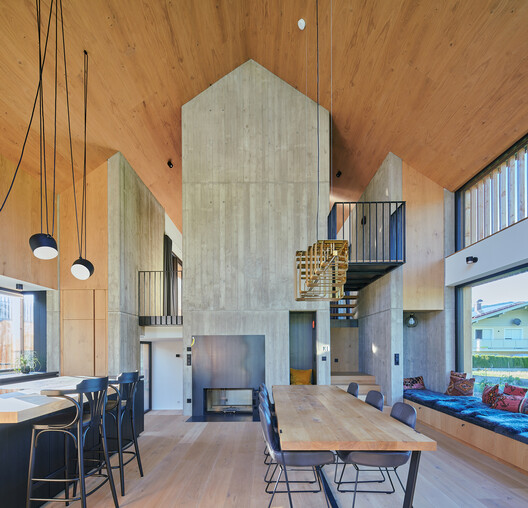 Karnival of the Arts: East Koast