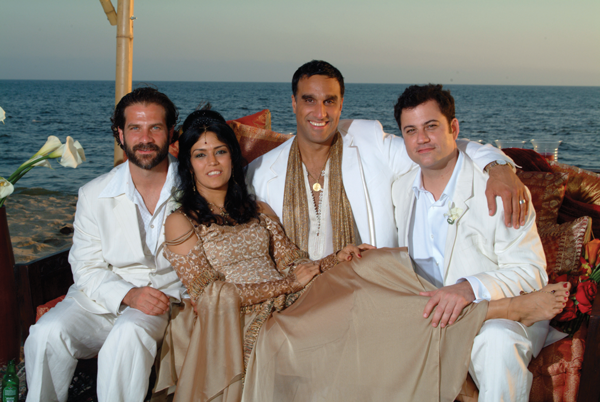 A Day in the World of Branded Entertainment Douglas De Luca

Douglas De Luca is an unassuming media executive in the day glow world of entertainment. His philosophy towards business and in his personal life is very simple — be a straight shooter and always do the right thing with integrity and honesty. With tenacity and a substance-over-style approach to conducting business, he’s been blazing his own trail in the ‘biz’ since the early 1990’s and has never looked back.

Luca grew up in a traditional Italian household, surrounded by friends and family throughout his formative years, “I loved growing up in my hometown. It was a great place, filled with great people,” reminisces De Luca. It was this stylized La Famiglia upbringing and heritage that even today defines his character and is subsequently the foundation for his approach to every aspect of life.

When reflecting on his past, De Luca was gracious in his assessment of those individuals that had made an impact on his life. “There were so many people. I believe that everybody you touch in life somehow has an effect on you. I was fortunate to have many, many people that had a profound effect… It started all the way back with my family. My mother, father, grandfather and even some uncles in my life were very influential,” recalls De Luca. “My whole life, I have been incredibly fortunate to have a group of people that I’ve come into contact with that were amazing teachers and guides. When life and the universe conspire with you, you live your life with eyes wide-open.”

De Luca has a sense-of-self that is both beguiling and refreshing. He readily admits that early on he never really knew or understood the why’s or the meanings behind things that felt right, but all his life he tried to follow his instincts. How he conducts himself is a direct reflection of his character, the life and career he has built for himself. He credits his wife, A native of Union, New Jersey, De Alejandra, a life coach and Pranic Healer for bringing everything into focus and keeping things on track for him.

His career began almost ironically upon moving to California after graduating from college. After a brief job search looking for a career that might utilize his international business degree, he received course-altering advice from a friend. It went something like this… Listen, LA is an industry town and your personality is cut out for the entertainment industry, so before you take a 9 to 5 job, go to Central Casting and sign up to be an extra. Get on a movie set and see what it’s all about!

De Luca took the advice and while in line with his application and Polaroid, a casting director walked by, looked at Douglas and said, are you working tomorrow? He landed a gig on the police drama, “Hunter” and so his incredible career in the entertainment industry began.

“As an extra, I was making $40 a day and then one day someone called and offered me a job as a production assistant for $100 a day, cash! One day turned into another and another and I stayed working behind the camera. I love this industry and no matter what, in life you have to love what you do and do it with great enthusiasm. Otherwise you’ll never be happy.”

Here is the quintessential ‘can do’ person that laughed at himself then and he’s been laughing ever since. Today, De Luca is the Co-Executive Producer of “Jimmy Kimmel Live”. A relationship that began during the first days of “The Man Show”, he was brought in to bridge the gap between the various entities on the show, which turned into four hugely successful years.

It was during this time that the idea to create an Italian festival in Los Angeles took on a life of its own. “Jimmy Kimmel was born and raised in Brooklyn. He loves his Italian roots. During the Man Show we would cook up these feasts at his house. We both love to cook. Growing up on the east coast, the feast of San Gennaro in New York was a right of passage each year. It was one last hurrah for the children as the summer came to an end. I looked at Jimmy and said we’re going to do that here. They’ve never looked back as they founded the San Gennaro Foundation.

It is a well-known fact that in September 2002, some of Los Angeles’ most prominent Italian- American citizens got together and produced the 1st Annual Italian Feast of San Gennaro Los Angeles. Just like the 80+year-old New York tradition, the three-day festival celebrates all things Italian. This September will mark the 10th anniversary.

The San Gennaro Foundation is a non-profit organization, established to aid children and families in need in the Los Angeles area. As a Founder, De Luca was chairman of the festival for the first six years. “We always focus on helping the underprivileged, especially the children.” This is directly in-line with his personal philosophy of giving back. “You can’t just be a taker. You will reap what you sow…this is a very simple fact of life”.

De Luca muses that “I believe that there is a shift in consciousness happening in the world. I tend to be a very optimistic person….I find that people are more aware of their surroundings, the Earth and other people. You can’t make a change overnight but you can do your part, one piece at a time.”

Today, De Luca is focused on all things Jimmy Kimmel Live. After a significant period of time, blood, sweat and tears the show is finally getting the recognition it deserves. This is in part due to the role he has played in developing the ‘branded entertainment’ side of the business and by keeping his eye on the end result.

After the show’s launch, there was an extraordinary amount of energy placed on just the “nut and bolts” of the program. From there what happened was done out of necessity. With virtually no budget, but a plethora of cool and creative ideas, De Luca embarked on a quest to raise money, and raise money he did. From there the “branded entertainment” division blossomed.

Since the beginning, the department that De Luca created has generated close to $100 million dollars in additional revenue for the show. According to De Luca this is not necessarily a surprise. “We care about what we put on the screen. Our clients appreciate that. It’s about quality, being relevant and, of course, it has to be funny.”

Reaching a younger audience was a product of building an on-line fan base for various web platforms. The show achieved enormous success with the videos they placed on YouTube. With as many people watching the show on the Internet as there are on television, the site adds up to 50 new videos each week. In terms of numbers, this equals over 200 million views this year alone. De Luca’s goal is to make Jimmy Kimmel Live the most watched and most successful television show on late night. He and his team are responsible for selling, creating and executing on new business opportunities and big show specials. According to Douglas, “We are experiencing amazing growth and we are reaching more fans everyday on a variety of platforms. It’s about bringing the content to them… where and how they want to enjoy it.” Now that’s how you grow a fan base in a digital age.

Inspiration can come in all forms and does. “It’s odd because I am definitely inspired everyday and on an ongoing basis. Listen, I have the opportunity to touch the lives of a lot of people in a very positive way. So I choose to do good things, explore new ideas and hopefully help people in an entertaining and fun way. Life doesn’t have to be so serious in order to live it with purpose.”

At the risk of sounding cliché, the branded entertainment trailblazer sums it up with saying, “I’ve been blessed and I do something I love, but what really makes sense of all this is when I look at my daughter. I am amazed every day by the cycle of life and this beautiful little being in my presence. She and my wife make it all worthwhile. That and taking life one day at a time.”

To Own a Dream: Lisa Erspamer