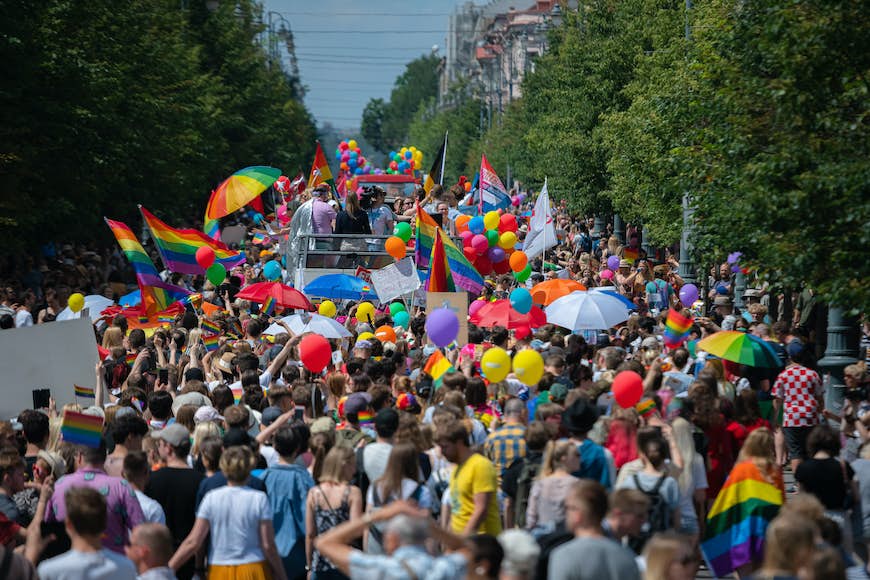 After a two-year hiatus, Europe’s best LGBTIQ+ destinations return this summer with live, in-person pride events that will be bursting with pent-up queer energy.

Expect boisterous crowds meeting in person for the first time in what feels like forever. But it’s not just about dancing, drinking and hooking up. We’re also highlighting conservative Eastern European countries whose queer citizens must still fight for basic rights while battling harassment and worse.

Get ready for a rainbow-lit Eiffel Tower, Big Ben and Colosseum but spare a thought for our LGBTIQ+ siblings from Kyiv hastily forced to organize a pride event in Poland with Warsaw Pride, thwarted by a nonsensical and devastating war of aggression.

Here’s your guide to the best of Europe Pride 2022.

Must-visit LGBTIQ+ neighborhood: With just a handful of LGBTIQ+ venues, Vilnius has no defined gayborhood. The small queer community is friendly despite the pressures of living in a conservative society without the same protections as LGBTIQ+ folx in more progressive European cities. Still, the city charms with intact historic architecture while fearlessly highlighting darker chapters from Soviet and Nazi periods. An easy 1.5-hour train ride from Vilnius, Kaunas, Lithuania is one of three 2022 European Capitals of Culture – along with Esch-sur-Alzette, Luxembourg and Novi Sad, Serbia – a compelling destination for contemporary and historic art and architecture.

Must-visit LGBTIQ+ neighborhood: Just 40 minutes south of Barcelona by train, Sitges is a small Catalan seaside town that is proudly LGBTIQ+ friendly. There are gay hotels, bars and clubs mostly concentrated in the center of town. Any of the 17 beaches will be LGBTIQ+ friendly, but Platja de la Bassa Rodona is the main LGBTIQ+ beach along with Cala de l’Home Mort and Platja dels Balmins, which are the nude beaches a bit farther from the town center.

Get the inside scoop on the latest cultural happenings all over the world delivered weekly to your inbox with our email newsletter.

2022 Pride dates: June 6-12. Rome Pride is colorful and lively, especially the parade (June 11). The juxtaposition of the thumping, sexy floats set against world famous landmarks like the Piazza Venezia is a joy to behold.

Must-visit LGBTIQ+ neighborhood: Gay Street, the queer neighborhood of Rome within view of the Colosseum, is a highly social 300-meter long pedestrian street with shopping, bars and lodging popular with queer folx but primarily gay men who enjoy the opportunity to meet in person rather than on hook-up aps.

The 12 best parks in Rome

2022 Pride dates: June 18-July 3. Cologne Gay Pride is Germany’s largest LGBTIQ+ celebration and one of the biggest in Europe. Highlights include the CSD Street Festival, (July 1-3) which takes place in many of the city’s public squares and the Pride Parade (CSD Demonstration) on July 3.

Must-visit LGBTIQ+ neighborhood: Cologne boasts two queer neighborhoods. Heumarkt-Mathiasstrasse on the east side and packed full of bars, caters to a more mature, leather-oriented crowd. Younger visitors will want to head west for bars and clubs clustered around Rudolfplatz-Schaafenstrasse. Don’t bother with car services. The underground subway system, the S-Bahn is efficient, quick and cheap.

How to spend a perfect long weekend in Cologne

2022 Pride dates: June 23-26. Barcelona Pride is a gigantic, fabulous event. The organizers are still finalizing the lineup, but the parade will take place on June 25.

Must-visit LGBTIQ+ neighborhood: Barcelona, the second largest city in Spain, is one of the safest and best destinations in Europe for LGBTIQ+ locals and visitors. You’ll find a warm welcome throughout the city but particularly in L’Eixample, around the iconic Plaça de Catalunya and fondly known as Gayxample. For North American visitors especially: note that happy hour in bars starts around midnight so yes, it’s a very late scene.

Where to find Barcelona’s most beautiful architecture

2022 Pride dates: June 25. Paris Pride unfurls over one day, and the city gets packed. Check out the parade but the real party will take place in Le Marais after, especially along Rue des Archives, Rue du Temple and Rue Vieille du Temple.

Must-visit LGBTIQ+ neighborhood: France decriminalized homosexuality in 1791 and Paris has always been a beacon for LGBTIQ+ folx and other nonconformists. Le Marais in the 4th arrondissement is still the primary queer neighborhood though many LGBTIQ+ venues closed or moved due to spiking rent prices and the effects of the pandemic. Pop in to l’Open Café before it closes permanently the day after pride, and hit Cox, Quetzel or FreeDJ for drinks and to meet locals.

The 10 best parks in Paris

2022 Pride dates: June 25. In a show of solidarity KyivPride and Warsaw Pride will march together in Warsaw, another victim of Russia’s unprovoked war in Ukraine.

Must-visit LGBTIQ+ neighborhood: While Poland is one of the worst countries for LGBTIQ+ people in Europe, society is slowing becoming more tolerant. There is no out-and-proud gayborhood, but there are a few fun gay bars, clubs and cafes sprinkled throughout the city, with the most in the central Śródmieście district. You’ll find an active bear community here (and the young cubs who love them), and there’s been a surge of monthly gay parties of all flavors. Pride is expected to draw 80,000 to Warsaw, so you will feel comfortable and surrounded by kin.

Why Poland should be your next foodie destination

2022 Pride dates: July 2. Pride in London will blow your rainbow-colored socks off. The rowdy parade winds through some of the most iconic sites in the city including Big Ben and Piccadilly Circus. It’s more political and less commercial than its counterpart in NYC – more socialist lesbians than Citibank senior staff. The parade ends at Trafalgar Square where colossal LGBTIQ+ crowds transform central London into a giant street party.

Must-visit LGBTIQ+ neighborhood: Soho is the largest and best known LGBTIQ+ neighborhood in London with a huge concentration of bars and clubs though you’ll find queer venues spanning the entire city from the clubs in Vauxhall to east London’s gay bars. There are so few lesbian bars left in the world, that it’s worth noting She Soho Bar, the must-go venue for women, is thriving.

2022 Pride dates: August 1-7. Stockholm Pride is a joyful, colorful event. The parade (Saturday, August 6) is expected to attract 50,000 participants making it the largest such event in Scandinavia.

Must-visit LGBTIQ+ neighborhood: Sweden is considered among the most liberal and progressive places in the world so it’s no wonder there is no single district considered to be the LGBTIQ+ neighborhood though you will find many queer-popular restaurants, clubs and cafes in the island district of Södermalm and Gamla Stan (Old Town). Stockholm is especially welcoming to non-binary and trans folks as evidenced in both favorable legislation and in the prevalence of gender-neutral bathroom facilities and clothing stores.

2022 Pride dates: July 30-August 7. Amsterdam Pride has two major highlights, including the unique Canal Parade (Saturday, August 6) and the annual Pride Walk (Saturday, July 30). The Canal Parade gathers 100,000s of primarily straight spectators to watch rainbow-bedecked rivercraft floating by along Amsterdam’s gorgeous canals. The Pride Walk consists mostly of queer people, with a special appeal for lesbians and trans folks, marching this year for those countries where LGBTIQ+ people do not enjoy the same rights as they do in the Netherlands.

Must-visit LGBTIQ+ neighborhood: Amsterdam is one of the most LGBTIQ+ friendly destinations on the planet so everywhere is pretty much queer friendly but you’ll find the gay area along Reguliersdwarsstraat. You’ll find Bar Buka, the only lesbian bar, in the de Pijp neighborhood.

The 19 best bars in Amsterdam, from cocktails to karaoke

Must-visit LGBTIQ+ neighborhood: Brighton and Hove are situated seaside only about an hour by train from London and the town itself is like an LGBTIQ+ neighborhood of London. You’ll find queer-friendly venues throughout town. Check out The Marlborough Pub and Theatre, especially popular with the trans and lesbian communities.

15 of the best things to do in Brighton

Where to celebrate Pride in Europe

Must-visit LGBTIQ+ neighborhood: There is no gayborhood but there are LGBTIQ+ venues scattered across the small island of 400,000 and in the tiny but elegant capital city Valletta, which is only 0.61 square kilometers (0.24 sq mi) – Europe’s smallest capital – with a population of 5730. Once sleepy and conservative, Malta only legalized divorce in 2013, but a more liberal government in office has since introduced protections for LGBTIQ+ people, including banning conversion therapy, legalizing same-sex marriage and introducing a third gender option on their passports. Celebrate these relatively new rights with a drink at lesbian-owned HMS Maori, situated on the waterfront overlooking the eponymous naval wreck.

How anarchist architecture could help us build back better after COVID

How psychological aspects of healing are important for hospital design