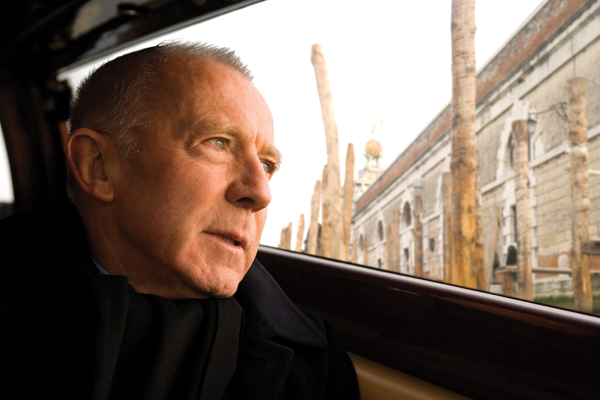 To meet the challenge, M. Pinault chose Tadao Ando, the Japanese architect with whom he had already collaborated on the renovation of the Palazzo Grassi in 2005. “His architectural language is noble, simple and respectful of history. In working with a monument that needed exploration, the choice of Tadao Ando was natural to transform the historic building into a source of inspiration,” Pinault acknowledges.

Renowned for the beauty of its setting, architecture and remark- able artworks, Venice’s cultural environment represented the perfect locale. The Punta della Dogana is a modern art museum created from a disused customs house at the entrance to Venice’s Grand Canal. The extraordinaire transformation of the 17th-century building took less than 2-years.

The Punta della Dogana is a modern art museum created from a disused customs house at the entrance to Venice’s Grand Canal. The transformation of the 17th-century building took less than 2-years. Ando has transformed the abandoned space into a simple and rational structure. The volume of the existing building forms a triangle that directly corresponds to the shape of the tip of Dorsoduro Island. The interior space is divided into long rectangles by a series of parallel walls. On these walls, created out of smoothed and polished cement, a material that is now a recognized leitmotif of Ando’s architecture. Mapping the Studio: Artists from the François Pinault Collection was the opening exhibition of Punta della Dogana in June 2009.

How meaningful this endeavor was to the legendary businessman whose business empire also includes GUCCI and Yves Saint Laurent. Pinault boasts a collection of which 40 are destined for the Punta della Dogana’s permanently. In addition, he is paying for the project out of his own pocket.

The impetus was to shake tradition up a bit given Venice’s proud and discreet persona. The goal of François Pinault was to recognize the benefit of all the work of those involved. The individuals who delivered the project on time and on budget.

‘In Praise of Doubt’ is currently being showcased at the Punta della Dogana by curator Caroline Bourgeois until December 2012. In the official press kit, the exhibition is described as a thematic presentation exploring the strength and weakness of the human condition, based on a selection of works from The François Pinault Foundation Collection. Drawing on emblematic works from the 1960s – and right up to the most contemporary creations – the exhibition aims to pay homage to doubt in its most dynamic manifestations; through its strength in challenging prejudices, conventions and certainties. The idea is to open up the field of possible questions in order to push back the limits each of us imposes, and to try and refocus our view of ourselves and the surrounding world.

The specific architectural nature of Punta della Dogana emphasizes this proposition. Each artist is presented in a dedicated area, and yet each is open to the others, as a result of the transparent features and passageways of the building. As you move from one area to the next, the confrontation between the various perspectives of different generations and origins are subtle, yet engaging.

Among those works selected from his private collection, were by well-known artists and those from the younger generation. The show features masterpieces of contemporary art by artists strongly identified with the awe-inspiring Pinault collection, which include the works of Jeff Koons, Donald Judd, and Maurizio Cattelana that span the past 40-years. These icons are shown side-by-side with the work of emerging talents such as Julie Mehretu and Adel Abdessemed.

There is art from Asia, Africa  and Latin America influencing western artists. Art aficionados of all types are readily embracing the global effect of art. Venice is a city that people from around the world should bask in all of the remarkable and historical aspects that for centuries have made it a true treasure.

As far back as 1990 the resplendent nature of François Pinault taste became apparent with the landmark acquisition of Mondrian’s “Tableau Losangique II” was purchased for $8.8m. Thereafter, the realization that the majority of reknowned art was already in a museum or a private collection, prompting him to begin collecting art that was meaningful and continuing to quench his enduring zeal for knowledge.

A selection of works of the Pinault’s collection for an exhibition entitled ‘Agony and Ecstasy’ is now being shown in Seoul until November 19th. The theme is brilliantly intertwined throughout, focusing on how individuals view themselves and one another. Promoting a cohesive approach to bridging the aperture of differences that make each person distinctive and unique. The event marks the first time ever that M. Pinault has shared any piece of his collection in Asia. Among the exhibition are some of the remarkable works from Damien Hirst, Jeff Koons, Takashi Murakami and Cindy Sherman.

Art is subjective. This has never been proven truer than with the collection of François Pinault. He has amassed more than 2,000 selected pieces. Every drawing, painting and sculpture reflects the boldness, generosity and originality of a true connoisseur. Someone who loves the splendor of art in all forms. One of the largest collectors of contemporary art in the world, François Pinault undertook the creation of the new center for contemporary art, as a symbol in the panoramic and luminescent city of Venice.