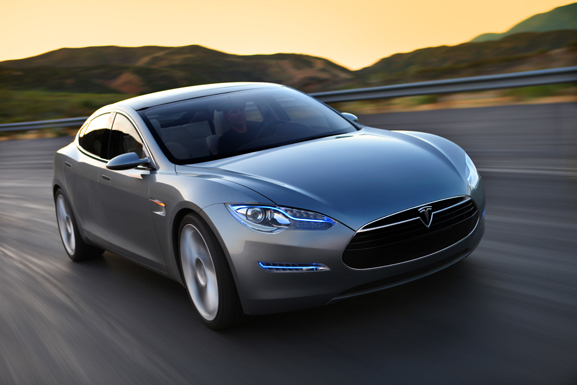 One of von Holzhausen’s challenges is to sell the testosterone-drenched market for hot cars on Tesla’s good looks and fastidious detail. “My job as designer at Tesla is to provide an uncompromising vehicle, both in power and functionality,” he says.

Tesla is off to a good start: the first Tesla Roadster, designed before von Holzhausen joined the company, has already garnered the kind of buzz that carmakers like to hear. Von Holzhausen redesigned the Roadster’s interior for 2010 and added numerous upgrades throughout the interior and exterior. The 2009 Roadster, according to carconnection.com, “provides kick-ass all-electric performance in a classic, almost primitive two-seater drop-top: maximum driving pleasure with minimum eco impact.” The 2011 model is expected to follow suit.

At the same time, von Holzhausen must convince consumers that an all-electric vehicle, minus the vroom!, is just as sexy as a purring V8. Says von Holzhausen, “Our design overcompensates for any unwillingness on the part of consumers to become early adopters” of Tesla’s battery technology. A 992-pound pack of lithium-ion battery cells behind the driver’s seat powers the Roadster, while the electric motor sits under the battery pack.

Franz von Holzhausen spends his days in a high-security rocket factory in Hawthorne; Tesla co-founder, CEO and Chairman Elon Musk, is also founder and CEO of Space Exploration Technologies, or SpaceX, a NASA contractor and the first private company to put a rocket into orbit. There, the casually dressed von Holzhausen and his staff of eleven designers are putting the finishing touches on Tesla’s first luxury sedan: the Model S. A more compact electric engine creates extra room in the car’s interior, allowing seating for seven people and enough space left over to stow their gear. In contrast to the original Tesla Roadster, which is priced at $109,000, the Model S, elegant and elongated, carries a base price of $57,499, or $49,900 after a US federal tax credit good through at least 2016.

Even by the fast-moving, youth-oriented standards of the automotive industry, von Holzhausen is something of a prodigy, having packed in as much experience as other designers who are decades older. After graduating from Art Center College of Design in the early 1990s, the American-born, soft-spoken von Holzhausen worked for Volkswagen at the mother ship in Wolfsburg, Germany, where he worked on the microbus and the new Beetle. Later, he spent several years with GM at the corporate citadel in Warren, Michigan, before transitioning to Mazda.

“Sometimes, when I’m driving on the freeway, I see people in cars that I’ve designed or helped design,” reveals the design chief. “I look closely, because I want to see what kinds of people are driving those cars.”

If Tesla has received a lot of media attention, von Holzhausen acknowledges the carmaker is competing with better-established manufacturers. “The costs of entry are huge,” he says. ≤