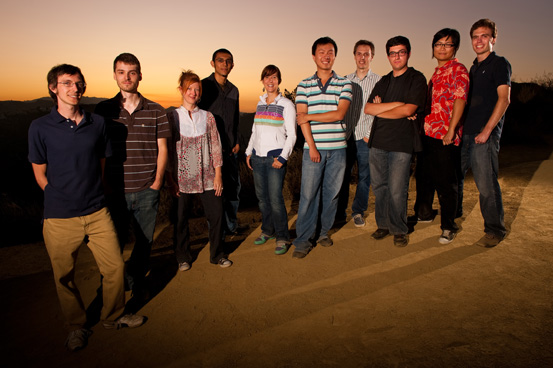 “Smaller companies like Chen’s can take risks and think outside the box,” says Tina Kowalewski, director of external development for Sony Computer Entertainment America (SCEA). Chen and Santiago enjoy the company of several other top developers in Sony’s talent pool, which includes Jonathan Mak, whose Everyday Shooter uses abstract forms and an original soundtrack to inspire players to reach for the next level of play, and Dylan Cuthbert, creator of PixelJunk Monsters, one game in the popular series where an arsenal can be built to fend off enemies by creating and amassing towers.

Chen, whose release Flower quickly became a top download upon its February 2009 debut and who has earned a spot on Fast Company’s 2009 Most Creative People List, draws inspiration for his game designs from the theory of “flow” by Hungarian-American psychologist Mihály Csíkszentmihályi. The theory proposes that people are the happiest when they reach a state of complete concentration also known as being “in the zone.” In their games, Chen and Santiago find the balance between ease and difficulty so that “flow” occurs.

Rendered in a beautiful palette of lush color, Flower begins in an urban setting but quickly allows the player-controlled flock of petals to escape into nature—fields made up of 200,000 individual blades of grass. “Each flower has different themes. A player chooses one to satisfy a desire,” Chen explains. The experience is, at once, both exhilarating and meditative.

“I want to create unique experiences,” reveals Chen about his games. In the creative process, he functions as creative director, working with a team of game designers, code-writing engineers, artists, and composers. Later in the production, focus testing is done once a week to fine-tune a game. Flower was completed in two years.

The artistic analogs of top-round sports draft picks, Chen and Santiago were plucked from USC Film School and given a three-game contract as independent developers to create new content based on their fresh approach. The pair represents the next generation of game designers, one whose goal is to provide a more sophisticated emotional experience for a maturing gaming audience. “Fear, anger, joy and frustration—Jenova’s games draw this out of people,” notes Steve Tucker, vice president of development at games2win.com. “It takes the predictability out of playing a video game.”