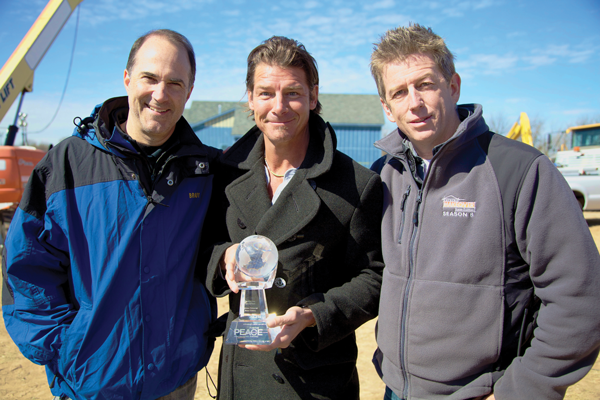 It’s a huge accomplishment when any prime time show makes it to 200 episodes, but when Extreme Makeover: Home Edition reaches that number in its upcoming ninth season, it will also have the distinction of having rebuilt the lives of 200 families by building each of them a brand new home, tearing down the existing one and putting up the new home — in just one week.

Executive producers George Verschoor and Brady Connell say the short time for building each home is not the hardest part of their jobs. What’s most difficult, they say, is choosing which family gets the new house. “Our show is about more than need,” explains Verschoor, “It’s about people who deserve to be recognized and have the spotlight; people who, in the face of incredible tragedy and incredible challenges do something heroic, so much so that you say, ‘Wow, could I do that in their situation?’”

From thousands of nominations, several worthy candidates are identified, but the final choice often comes down to cooperation from others, because all the materials and labor for the new homes are donated and plans for the new structures have to be approved quickly. “The builder has to put everything on hold with his whole company for months to execute the impossible,” says producer Connell. “They have to convince all their builders, all their contractors, volunteers, across the board — from the catering tent to the project manager — to donate their time and the materials. Every brick, every shingle, every piece of furniture is donated. It’s an extraordinary philanthropic effort that happens every week.” “Helping our neighbors is really what this country is all about,” he adds, “this happens everywhere we go, in all 50 states.”

The whole process takes four to five months, beginning when casting finds the family, and designs are submitted for the home that will meet the special needs of the families, many of which have a member with a severe disability, to when the show is shot and the house is built in a one-week period. There’s also a battery of extensive background checks and research done to make sure the recipients’ stories are as they presented them to the EM:HE team and that the family is indeed truly deserving.

EM:HE gets significant support, including appliances and materials, from sponsors including Sears, CVS/ pharmacy, and Ford. Kohler has been on board since the first season and has helped build 185 homes, including 226 kitchens, and more than 700 bathrooms. “Often modifications need to be made to existing products,” explains Kohler’s Todd Weber. “In the eighth season, we actually helped an individual who was paralyzed from the neck down from a car accident. He has special needs and transferring him to and from the bathtub was challenging. Kohler provided its new Elevance Rising Wall Bath, whose bath wall literally lowers to help move the gentleman into the bathtub much more easily. The wall is then raised and watertight sealed so he can take a good soaking bath. During this episode, because the home has an elevator and automatic doors, continuous power is imperative, so Kohler provided a home standby generator to assure this family had constant, reliable power to guard against possible power outages from severe weather.”

KraftMaid has also been there since the first episode, providing cabinetry for nearly all of the 200 homes. Spokesman Mark Ayers says KraftMaid cabinetry has been utilitized in new ways. “For example, creating new shelving units out of existing product to accommodate the needs of an entertainment center for a family with special hearing or visual needs.”

“We love creating beautiful spaces that work for the people who live in them. EM:HE gives KraftMaid a way to do that for families whose lives are truly changed by our involvement. It’s exciting to see how much life can be changed by simply understanding more about the day- to-day needs of the household and applying that information to design spaces using cabinetry.”

Each week, two different EM:HE production crews travel to two different cities to surprise two deserving families. While there are two groups of on-air and behind-the-scenes designers to tailor-make the homes to suit the families, the show’s host Ty Pennington flies back and forth between the two locations. With megaphone in hand, Pennington does the “door knock,” announcing to the family that they have been chosen. The family is sent on an all-expenses-paid vacation for the week-long build. Then Pennington does the “reveal” where crowds, including thousands of people who have volunteered and helped build the house chant “move that bus!” The family members — usually with tears in their eyes — then get to see their new home for the first time.

“These are real people with real lives, whose home is going to have to suit them,” says Verschoor. “It’s not just a TV show with extreme elements, but it has to be practical for them to live in, so that’s a challenge, too. The design elements help us tell a story because, if you have a father who has suffered a paralyzing injury and is a former baseball player, then how does that affect the design of the home? How does that convey some transformation? Because this is all about watching a person transform from when we got there to when we leave. —How did we change his life through design? We just got back from that story, where we designed a batting cage that the man could control even though he couldn’t move his arms. —He wanted to pitch a baseball to his son, so the designers came up with this idea where he could use sip‘n’puff technology and actually control a batting machine, throw a baseball to his son. As soon as he did it, he knew he had his life again, he was a dad again, and it’s those moments when all of us who produce the show are in tears — that’s why we do this. It’s like design, delivery, emotion.”

The two executive producers have about 50 years of reality television producing experience between them, having worked on shows ranging from Survivor and The Amazing Race to Rescue 911 and The Real World. Both came on board at Extreme Makeover because the show “gives back.” Little did they know that, along with their top notch production team, they’d be producing the impossible week after week.

“We do 22 episodes a year,” says Connell proudly, “so twenty-two families a year are significantly affected, as are their communities. We get on a plane and, after we’ve spent ten days in a town, built a house in seven days, having potentially paid off a mortgage, provided scholarships, and galvanized the community, we leave and I feel great. I mean literally, we get on the plane, and I look out the window and look down and I think, ‘wow that was pretty cool, and we get to do it again next week!’” Not surprisingly, Extreme Makeover: Home Edition is the winner of the United Nations NGO award for “Most Positive TV Show in the World.”

To Own a Dream: Lisa Erspamer