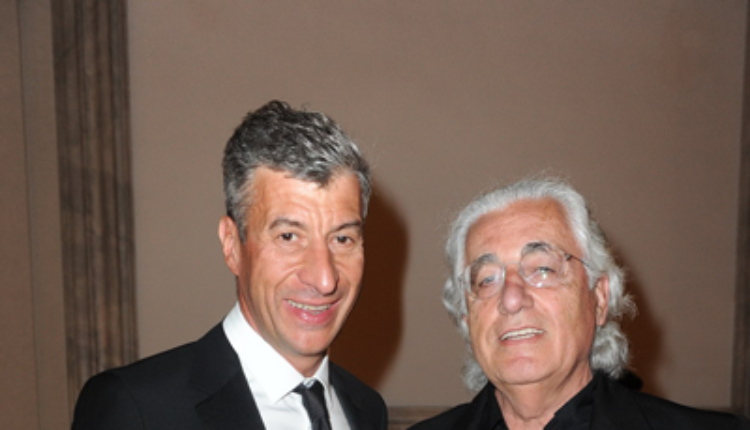 Warning: A non-numeric value encountered in /home/artandliving1/public_html/wp-content/themes/publisher/includes/func-review-rating.php on line 213
356,700
Share

In the arts empyrean that is the 54th Venice Biennale—where  the title of the main exhibition, Illuminations, means to under-score the idea of the artist as a source of enlightenment and art as that revelatory light—some comets, planets, solar systems and galaxies blaze brighter than others. But the likely lodestar of this bigger-than-ever Biennale, with 89 countries represented (12 more than two years ago, including newcomers such as Andorra, Bahrain, Bangladesh, Malaysia, Rwanda and Saudi Arabia), as well as hundreds of exhibitions scattered between the city’s famous canals, is the Prada Foundation’s Ca’ Corner della Regina, a new, private museum launched on May 31 in an early 18th-century palazzo on the grand Canal, and its debut exhibition curated by Germano Celant.

A tour de force of pieces from Miuccia Prada and husband Patrizio Bertelli’s collection, the exhibition includes a master-work from the Arte Povera (Poor Art) movement in Italian modernism by Alberto Burri, Enrico Castellani, and, of course, Lucio Fontana (among others); modern American pieces by Bruce Nauman, Donald Judd and Brice Marden (among others); and contemporary art from an international, starry roster—Jeff Koons, Anish Kapoor, Tom Friedman and Damien Hirst among the twinklers. All well and good, and all highly collectible, the majority of artists well represented in keystone museum collections, and most guaranteed to claim stratospheric results in London and New York auction rooms.

But what makes the assemblage sing— loudly, beautifully, even brilliantly—is its display, the accords and punctuating discords of the exhibition itself as conceived by its curator Celant, who additionally incorporated works and installations in collaboration with The State Hermitage Museum (St. Petersburg), the Fondazione Musei Civici of (Venice), The Mathaf-Arab Museum of Modern Art and the Museum of Islamic Art of (Doha), as well as with contemporary artists such as Thomas Demand, theorist Marco Giusti and Tate Modern International Art curator Nicholas Cullinan.

The results have not only beguiled Biennale boldfaces—be they euro-pound-dollar-yuan- carrying members of the international contemporary collecting crowd; academics and museum directors; or Hollywood celebrities such as Courtney Love—but also captivated the arts media, such as Jackie Wullschlager who in the Financial Times declared, “This is a brilliant, relevant exhibition about global and local artistic identities. It positions Arte Povera, with its breakdown of boundaries between sculpture and painting and, as a key modern movement, and explores its impact in some major contemporary works.” It is a feat, both in conception and execution, of which Celant was uniquely capable.

Born in 1940 in Genoa, Celant is an art historian, critic, curator and groundbreaker, the author of more than one hundred publications (books and catalogues), and the curator of hundreds  of exhibitions (including Louise Bourgeois’s final exhibition in June 2010). He was the director of the Venice Biennale in 1997, has been a senior curator of contemporary art at New York’s Solomon R. Guggenheim Museum since 1989, and is the artistic director of the Prada Foundation (Fondazione Prada), a position he has held since 1995. And as far as Arte Povera, in addition to producing this year’s 2011:

Arte Povera in Italia, a massive series of exhibitions involving  five museums across Italy, Celant literally coined the term and wrote the book (his manifesto Notes for a Guerilla), both in 1967.

None of this was supposed to happen. At the University of Genoa, Celant initially studied to be an engineer. He didn’t like it, he has explained, because “all  of his friends were involved in culture.” Those friends included filmmakers and writers such as Pier Paolo Pasolini, Bernardo Bertolucci and Umberto Eco. “So not cinema and not literature, but art was not so well covered,” says Celant, showing a sense of humor. Finding what he calls his niche, he went on to study art history with Eugenio Battisti, one of the world’s leading experts on the history of Italian architecture, before curating his first exhibition at age 23, and writing his first book at 24. “Very fast. Then came Arte Povera. Then I went to New York.”

In New York, Celant stayed  not in hotels (“I never went to  a hotel in New York!”) but on studio floors—those belonging  to Mapplethorpe, Christo, Rauschenberg and Warhol, whom Celant credits with giving him “a kind of 360-degree attitude, the idea of covering something in all its aspects, without distinction, very democratic.” That orientation, combined with a propensity to read, write, interpret and analyze, as well as with a conviction that “the jazz of creation” is collaboration, enabled Celant to form what he calls “the language of exhibition,” a hier- archical approach and circular process that (1) first considers an exhibition’s space, (2) then collaboration with the space’s architect (“I learn a lot here,” he says), (3) followed by a new understanding of what the interiors will look like, (4) followed by a consideration of the space’s exterior and immediate surroundings, (5) then an appraisal of the city in which the exhibition is taking place and a general review of context, (6) and finally, “I go back and look at what kind of show it is.”

This kind of complexity and thoroughness, not to mention potential changeability, is not for staid, set-in-stone types. Rather, it’s for creative who aren’t afraid to flirt with the unknown, even a bit of chaos, with the confidence that such a crucible will yield a finer result. People such as Miuccia Prada and Patrizio Bertelli who, acting on their growing interest in contemporary art, founded “PradaMilanoArte” in 1993 before reorganizing it into the Prada Foundation two years later. “When Miuccia and Patrizio approached me, I said, Let’s do a trip, and I’ll show you what I like. We went to the desert in New Mexico and I showed them The Lightning Field by Walter De Maria, which is one mile by one kilometer in size. Then we took the helicopter and went to see Double Negative by Michael Heizer, a 1,500-foot long, 50-foot deep and 30-foot wide trench that involved the removal of 240,000 tons of earth. I said, This is my scale. Can you handle it? They said: No problem,” Celant recounts.

So, perhaps it’s not surprising Prada, Bertelli and Celant would negotiate with the Comune di Venezia and the Fondazione Musei Civici to conserve, repair and restore the very grand Ca’ Corner della Regina in exchange for its use as an exhibition space for the Prada Foundation for up to 12 years.

Perhaps it’s not so surprising that renowned architect Rem Koolhaas would be engaged to curate the Largo Isarco Project, the Prada Foundation’s Milan museum, scheduled to open in 2013 and operate in tandem with Venice. (The Prada-Koolhaas relationship dates back to the 1999 design of the first Prada Epicenter store in Soho, New York.)

But perhaps only Celant-the- curator knew how his exhibition would articulate the Foundation’s approach without “imposing a single, thematic interpretation of the art and museum materials presented.” Or how effective the palazzo would be as a platform for modern and contemporary art (whether by the contrast of materials or the complement of ambitious conceit). Or, for connoisseur and casual visitor alike, how powerful and beautiful the composite would be. And it is.

Jacques d’Amboise: Come Dance with Me

The Finest Fair on Earth: The European Fine Art Fair