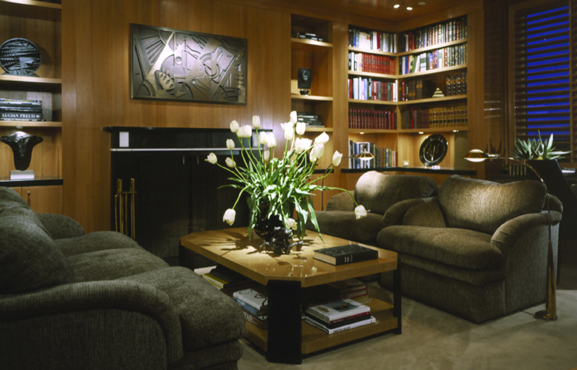 Goddess in the Details

Warning: A non-numeric value encountered in /home/artandliving1/public_html/wp-content/themes/publisher/includes/func-review-rating.php on line 213
426
Share

I can’t be all things to all people,” confides Sally Sirkin Lewis, sitting gingerly on a sofa of her own design in the Melrose Avenue showroom of international home furnishings retailer J. Robert Scott.“I realize that we have a limited market.”

Nor does Lewis want to be a follower. “I don’t like to do what everybody else does,”shesays.“If I heard that one of my pieces looked like somebody else’s, I would take it off the floor.”

Those words may sound surprising coming from a designer who has built a worldwide following by producing furniture, fabrics and decorative objects that co-exist happily with nearly everything. A slight and slender woman, she is dressed this morning in tailored tan trousers and a form-fitting black blouse with subtly constructed shoulders, set off by a gold brooch that resembles an explosion of tiny blocks.

Founded 36 years ago by Lewis and her former husband, J. Robert Scott has grown from a single small showroom in West Hollywood to a global company with representation in 23 cities and 14 countries around the world. Places like Hamburg, Auckland,Taipei and Cairo are all on the register of J. Robert Scott locales; Russia alone has two showroom locations. One of the most productive, she says, is the London showroom. “It’s only 1,500 square feet, but it’s very active because all international sales are managed through that location,” she says.

As a designer, Lewis likes a mix of styles.“I love putting a stainless steel table with period chairs. It’s beautiful,” she says. An avowed modernist, she will often take an antique style as a point of departure and progressively remove non-essential elements until she arrives at a much more minimal piece that still manages to retain a clear familial resemblance to Hepplewhite or Louis Quinze or another classic type of design.

Lewis continues to be the principal designer and idea source for J. Robert Scott, where fabric collections are a current preoccupation. One textile collection, The Venetian Collection, she says was inspired by the ancient palazzi along the Grand Canal inVenice.Another, Elefant, is inspired by the many colors of the skin of its namesake. “I love the skin of elephants, and I love the animals them- selves,” Lewis says.

She is forthcoming with her personal tastes.“I like simplicity,” she says firmly. “I don’t like tricks or gimmicks.” Among architects, she likes the “classic modernists”—Le Corbusier and Mies van der Rohe. “I love designing around their furniture,” she explains, adding that she likes all kinds of furniture except for High Victorian. (She can appreciate French Empire, as long as there isn’t too much of it.) Among living architects, her favorite is Tadao Ando, the Japanese designer of the Modern Art Museum in Fort Worth,Texas. Among painters, Lewis admires Lucio Fontana, Ellsworth Kelly, Franz Kline, Brice Marden, Ad Reinhard, Adolf Gottlieb and Morris Louis.

For Lewis, life (and design) are in the details. “My mother imbued me with the sense of quality,” she says. “Quality goes from the outside in,” she remem- bers her mother saying. “You don’t want to wear a fine gown and have torn undergarments underneath.” In other words, the internal structure of furniture must be as sound as the outside is good-looking.

Lewis also likes the manufacturing process, which she explains could be seen as an extension of a furnishing’s design phase. “If I see something I don’t like in the factory, I don’t blame others. I take responsibility for it myself,” she reveals.“I get down on the concrete floor with the guys and we sketch out the detail. It’s great fun.” In the showroom, Lewis points to the base of a sofa, which has a slight, almost undetectable, concave curve on its narrow side that prevents the furnishing from looking heavy and slab-like.

“That’s what I mean by details,” she says.

Despite her prodigious knowledge of design, marketing and fabrication, Lewis has little formal training. Her family background—grandfather a dress designer, father an engineer, mother an artist—and its atmosphere of elegance were her greatest influences, she says. “I am absolutely the product of my environment, with its gorgeous taste, pin-striped suits for men and beautifully designed clothing for women,” she reveals with a sense of nostalgia so strong that the era of her childhood becomes almost palpable.

Much of her knowledge comes from working with architects directly— preparing finish schedules and so forth. It has been these experiences, she says, that have given her an appreciation both of design and the real-world discipline of putting things together.“I know how to design the wiring for a 10-story building,” she says, clearly delighted by the fact.

Nearly all of J. Robert Scott’s furniture and home furnishings are made in the company’s factory in Inglewood, California; only fabrics are imported. One of the few major furniture makers who still manufactures stateside, Lewis says it is critical to stay involved in the process. She explains she has turned down multiple requests to have her designs executed in China. “I’ve never been willing to succumb,” she says. “I could get the work done for less in China, but I couldn’t be there to check the quality, and I won’t sacrifice that.”

And there seems to be no slowing down for the designer.“I am constantly planning and designing. New ideas come to me so fast; I am always drawing something new,” she happily affirms. “I’m lucky—I’m doing what I love.”

Pictured: Lewis furnishings overlook the Pacific in the study of a Malibu, California home. Photo by Mary E. Nichols.