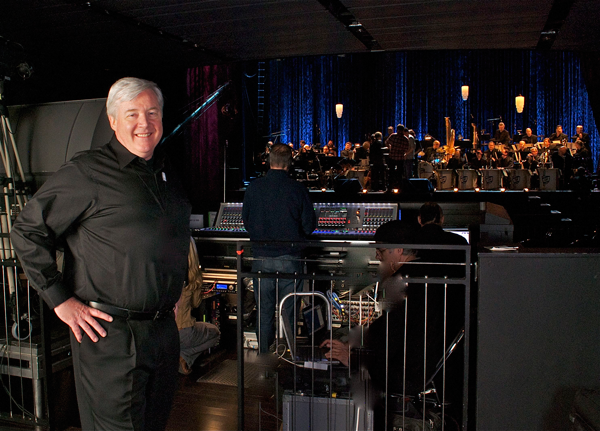 The man behind producing the world’s premier concerts is John Rubey, President of AEG Network Live. A seasoned industry leader, Rubey has been in the entertainment marketing and digital content field for over 25 years. He has steered the business to become the world’s largest multi-media company that produces live, branded entertainment, connecting performers to their fans globally through all technological platforms. His leadership has also made AEG a trailblazer in the 3D digital content world.

Rubey’s passion can be felt in every project he touches. Whether overseeing the 3D filming and distribution of The Black Eyed Peas, the first live 3D concert to cinemas, Dave Matthews Band and Phish or We are the World 25 for Haiti 3D, live music festivals like Lollapalooza, ACL, Coachella and many more or amazing digital cinema, online and mobile events for artists such as Garth Brooks, Linkin Park, Prince and Celine Dion, Rubey is making his desires to entertain the entire world a reality.

“One thing I learned from a mentor was that we are not in the entertainment business, we are in the business of entertainment,” says Rubey. “There’s a key distinction. We have to create economic value for the artist, the fan and ourselves as we properly monetize it.”

Expanding the consumer base to a global audience became a key factor in monetization. It was during the early days of pay-per-view that enhanced John’s desire to create content that could be available to a large audience regardless of geography. With the last decade’s advent of digital 3D, accessible high-definition technology that is coupled with social and mobile media, delivery capabilities and creativity have evolved exponentially.

Keeping in mind that it’s not just entertainment that tweaks John’s interest, he’s also aware of the social and philanthropic benefits of being able to reach a world- wide audience. He spearheaded the production and distribution of We Are The World 25 for Haiti, captured in 3D and initially broadcast during the opening ceremonies of the 2010 Vancouver Olympics on NBC.

“Once Quincy Jones, Lionel Richie, Randy Phillips and Peter Tortoricci pushed the ‘go’ but- ton, over 85 artists joined to come together in the very same room where they had created something truly special 25 years earlier,” he explains. “It took us five days to put the production together. We were then able to showcase what had been accomplished to a global audience from mobile phones to movie theaters. This was an instance that proved how awareness can be far more impactful powerful than just direct fundraising. During that release, the Internet searches for the word Haiti went up tenfold. Donations poured in to not only the WATW Foundation, but also the American Red Cross, and many other worthy organizations. It was a time when there were a lot of grieving going around, and our content helped motivate people to take action. The coolest thing was that we had everyone from third world citizens still running standard definition televisions to state-of-the-art smartphones showing the same content. We knew how to connect those dots, and that speaks volumes to how a small room of people or a company can do the exact same thing.”

“Our biggest outlets are yet to emerge,” he says. ”We have produced 80 3D programs, the largest number in the world to date. Our game plan is to really begin to reveal the content like the recently released Bon Jovi What’s Next 3D, which premiered on n3D (DIRECTV) and is now on 3net (Discovery/SONY/IMAX). It is the first behind-the-scenes single artist 3D feature ever produced and broadcast nationally.”

Not intimidated by a brave new world, Rubey loves working in Los Angeles, a Petri dish for new technology and its young up-and- coming creative wizards “We look at this like P.T. Barnum,” he explains. “The closer we can get to a busy street corner, the easier it is for us to draw a crowd. Globalization is a huge opportunity for us. Look at the Egyptian revolution! That was a game changer when the government shut off the Internet and showed us that today’s power lies is with the individual. People today get their information from very customized, personal sources. We are happy to throw our entertainment options into that mix, easily accessible and enjoyable.

Rubey’s next adventure, one of many is an upcoming project called Just Cause, which will feature artists talking about their music and craft but also the causes that they are passionate about and how fans can join and contribute. He hopes it will motivate people watching get off the couch and make a difference.

Rubey’s efforts can be seen around the world in cinemas, live concert events and forging new grounds in 3D. His
work has been recognized and noted publicly with an astounding and impressive number of more than 85 Telly Awards on many productions, Four Mobile Excellence Awards honoring his work on the Michael Jackson Memorial Service and also the Humanitarian Award for We Are The World 25 For Haiti. Rubey was also recently awarded several awards for 3D productions, including the International 3D Society Luminaire for Best Live event for his 3D work and production of Black Eye Peas LIVE in 3D, the Hollywood 3D Film Festival Best 3D Music Video for We Are The World 25 for Haiti 3D and four of the first 3D Tellys awarded in the first round of entries in the new category.