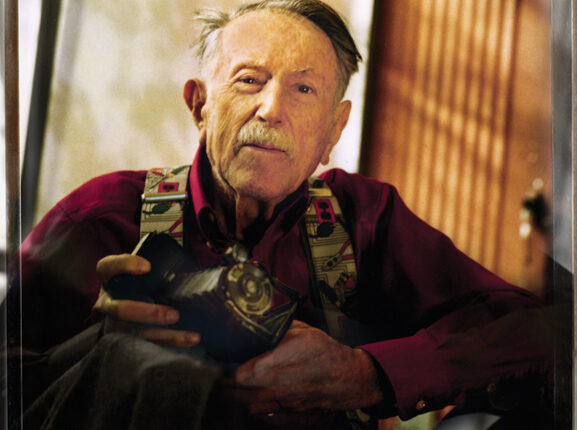 At an age when most men might be at least thirty years into retirement, Shulman shows scant signs of slowing down. In fact, today he is busier and more visible than ever, matching his exposure with a sharp wit, confidence and somewhat self-deprecating humor. Taking adulation in stride, he introduced himself to the crowd at OCMA under the moniker “the great Shulman”—his tongue firmly in cheek, of course.

The sage of architectural photography was also recently featured at the Los Angeles Central Library in Julius Shulman’s Los Angeles, a multifaceted show that included images of public landmarks, skyscrapers, business centers—and even some grittier sections of the city—all from the course of the photographer’s long career. Staged to coincide with the 10th anniversary of the Getty Center, the exhibit was comprised of 150 pieces from Shulman’s entire archive of 260,000 prints, negatives and color transparencies that the Getty received in 2005 and to which it now holds exclusive copyrights. Recently, the photographer has also been the subject of at least one major retrospective book and his calendar continues to remain filled with numerous speaking engagements and interviews.

So, while Shulman’s presence may seem everywhere these days, it may be surprising to some to learn that his images have not always been considered the artful masterpieces they are now. For years, Shulman had built a stellar reputation among architects, architectural historians and scholars as a commercial photographer, capturing shots that effectively illustrated and promoted architects’ work. His images were published in Arts & Architecture, Life, Look, Time, Good Housekeeping, Better Homes and Gardens and House and Garden magazines, among other American and foreign publications.

His clients saw him as the best in his field, but he wasn’t necessarily regarded as an artist, says Craig Krull, director of Craig Krull Gallery in Santa Monica, California. The gallerist saw more in Shulman’s work and went about exhibiting and marketing the photographer’s prints in a fine art context. “In 1989, Julius was still giving his work away,” recalls Krull. “But, once he began exhibiting in galleries, the work was recognized by art critics as that of an artist interpreting architecture.”

Krull helped stage Shulman’s inaugural show in 1991, which became the watershed event in bringing Shulman’s work to the world of fine art.

Krull says that Shulman’s photographs reveal not only his discerning eye but also an optimism that allows him to capture the spirit of both time and place. “The fundamental quality of both Julius and his work is optimism. His images embody the American Dream, the California Promise and the spirit of Modernism with its belief in the future,” he says. “Our sensibilities are perhaps more jaded now, so we tend to look at his work with a sense of longing for that optimism.”

Indeed, anyone thinking of Shulman will immediately conjure up the majestic shot of Pierre Koenig’s Case Study House #22, Los Angeles, 1960. The image evokes the spirit of Shulman and the zeitgeist of the epoch.

Photography is, for the most part, all about catching the right moment and, in Shulman, the ability to do so manifested itself when he enrolled in a photography class in high school. It was this class that first turned his lens loose on the world and gave him the impetus for capturing his first shot: a high school track meet.

After returning from UC Berkeley in 1936, the twenty-something Shulman was casting about for something to do when a young architect friend asked him to accompany him to the Kun house for an inspection. Since he had his Kodak vest-pocket camera (a gift from his sister) and a tripod along, he took a few shots of the house just for fun.  When they turned out well, the friend showed them to Neutra, who immediately found that the amateur photographer had captured the essence of his design and commissioned him to photograph several other buildings.

The neophyte made the transition from hobbyist to professional quickly enough, becoming firmly established as an architectural photographer by the time World War II began. Shulman’s list of clients was at one point a who’s-who of modernist architecture, including the likes of such greats as Mies van der Rohe, Frank Lloyd Wright and Oscar Niemeyer.

Asked to comment on postmodern architecture, Shulman says that he is still evaluating it, adding that the sort of steel and glass structures that defined his career are now almost impossible to build since LA has become too populous and people are clamoring for privacy. “You can’t build modernist houses on 50-foot lots,” he says.

He continues to travel extensively and takes assignments regularly, says Jürgen Nogai, a German-born photographer who is now Shulman’s artistic and business partner. Nogai, 53, also oversees printing and publication and makes sure that the older master conserves his (still considerable) energies. “We complement each other; Julius provides the vision and I help interpret it with strong technical know-how,” he explains.

Shulman’s work has been featured in calendars, books are still being published and lately he has generated articles in German publications like Der Spiegel and Die Zeit, as well as in Japanese and American publications. “The whole world seems to converge on him now, as long as we still have him,” says Nogai.

Shulman meanwhile teaches that architectural photography takes time and careful contemplation and admonishes students to put away the equipment until they have gotten a firm grip on what they are looking at. “It’s not just looking through the lens,” he asserts firmly. “It’s looking into your mind.”

The 2009 Los Angeles Art to Life Awards will be given out on the final night of the LA Art Show, January 25, 2009, at the Los Angeles Convention Center