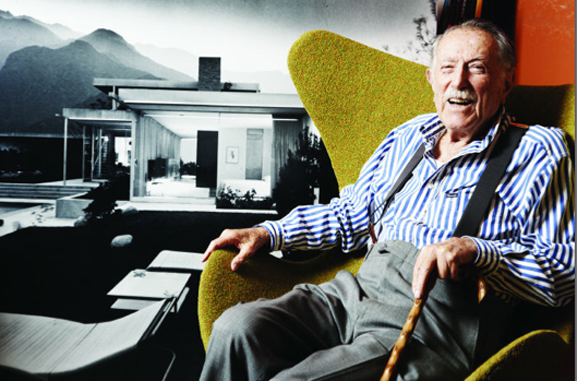 In fact, the store of photographs that makes up the Getty Research Institute’s Julius Shulman Photography Archive (Shulman bequeathed his prints to the Getty in 2005) is arguably one of the largest resources historians have at their disposal in chronicling the development of the physical urban fabric of Los Angeles.

Throughout the 20th century, Shulman always had his camera pointed towards LA’s future, so to speak. He chronicled not just the big, innovative developments that have become ingrained in the Angeleno sense of place—Bunker Hill, Century City, LAX,Wilshire Boulevard—but also composed numerous shots that captured the SoCal phenomenon of the single family home and reflected the overall architectural optimism of Los Angeles in the Postwar era.

In a move that complements the forward-looking nature of Shulman’s oeuvre, Julius Shulman’s Los Angeles at the Los Angeles Central Library presents renderings of current urban developments alongside prints from the Getty’s Shulman Archive so that visitors can compare the photographer’s historic perspectives with images of Los Angeles’ future.

It’s a much different future that Shulman himself recognizes as Los Angeles looks forward into the 21st century. At his Raphael Soriano-designed residence in the Los Angeles hills, the photographer remarks that it is almost impossible today to build new modernist homes like those he has photographed over the years because the city has become too populous and people are clamoring for privacy. “You can’t build modern houses that offer little privacy on 50-foot lots,” he says simply.