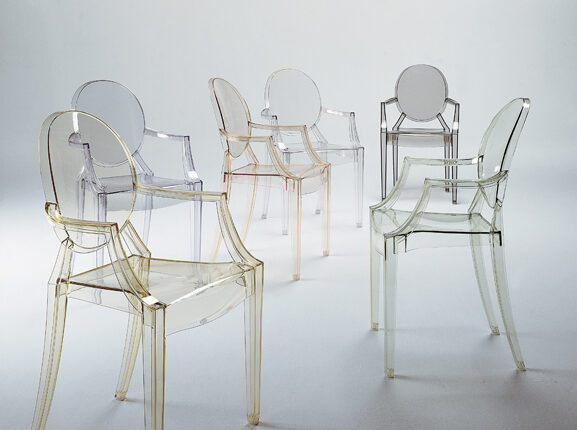 Warning: A non-numeric value encountered in /home/artandliving1/public_html/wp-content/themes/publisher/includes/func-review-rating.php on line 213
893
Share

Is there art in Kartell’s unique brand of industrial and furnishing design?

The line to enter the Covent Garden Super Design exhibition on opening night snaked out into the historic square of London from which it borrowed its name—it was the design event not to miss this last autumn. The introduction in the show’s catalogue explained its purpose: “to emphasis the current synergy between design and the visual arts”, and the pieces on display in the expansive 20,000-square-foot space, aptly illustrated this theme.

There were limited edition works such as the Petit Jardin Bench by Tord Boontje and Sushi Sofa by the Campana brothers. These pieces were notable not for their unique aesthetics, but rather for their numbers—or lack thereof. Only ten Petit Jardin and seven of the Sushi Sofa were commissioned, demonstrating a recent art world exclusivity trend that places design as commodity. Ambiguous sculptural forms such as the Line Series by Philip Michael Wolfson were beautiful, though it was not clear whether anyone should actually use these tables and benches as furniture or treat them as objet d’art and forgo any physical interaction with them.

Of all the furniture on display, one design that stood out was Louis Ghost, which—with its chic-yet-functional appearance—was a chair that was definitely designed to be used for its conventional purpose: sitting. Ghost was set not up on a pedestal under a spotlight (as were the other pieces), but instead rested simply behind a table used to welcome guests. Elegant and understated, sleek and classic, Ghost neither stole the stage nor did it lose any of its distinction amidst the more showy furniture.

Ghost fit so comfortably in this setting (I had already spotted her countless times in the nicest restaurants, bars, reception areas and offices of many a city) that I was reminded of a conversation I had recently with Claudio Luti, president of Kartell, the Italian furniture company that produces the chair. Luti had explained that what is created at his Milan-based company can only be classified as “industrial design” and did not enter into the “is it art” discourse such as that posed at Covent Garden Super Design. According to Luti, production in high numbers (annual sales of the Louis Ghost chair, for example, number around 140,000) poses different challenges to the creator, and the mass-produced product serves a different purpose than does a work of art or a limited edition design piece. The art in industrial design, he explained, is in producing pieces that retain the creative expression of the designer, a sensibility that can easily be lost in a process that relies upon machines and molds to produce pieces quickly and in high number.

Kartell collaborates with the best that the international design community has to offer; Patricia Urquiola, Ron Arad, Ronan & Erwan Bouroullec, and Philippe Stark, the creator of Ghost, are just a few of the designers on the roster. Through innovation, careful study, and passion, Kartell succeeds in creating a collection of industrially produced, beautiful pieces that are highly expressive and full of spirit—qualities often used to describe paintings or sculpture.

Chris Sanderson, co-founder of the consumer insight agency The Future Laboratory, recently stated, ”In the way that we used to hum and haw over whether a frock could be art, or whether a hat could make profound statements about society, we are beginning to realize that artists no longer hold the monopoly on emotional, spiritual or cultural communication. Design informs our thinking rather than just servicing our need to fulfill a task.” If the rest of the world is finally fully acknowledging the powerful influence of design, Italians have understood it for decades. Over the past half-century, Italian design has changed the way that people live the world over; Kartell is one of a handful of companies that continues to direct this change.

Founded by Giulio Castelli, a chemical engineer, and his wife, Anna Castelli Ferrieri, an architect and designer, in 1947, the company began experimenting with a new and highly innovative material at that time: plastic. In order to fully comprehend how great an impact Castelli’s work at Kartell has made upon society, it’s important to realize that, in the 40s, plastic was a foreign, artificial material—its possibilities had not yet been explored. The couple, working together with some of the greatest designers of the time (Gino Colombini, Marco Zanuso, and Joe Colombo, among others) succeeded in introducing and fully integrating plastic’s bright colors and strange texture into the most intimate place in our lives: the home. They changed the way the domestic environment looked and the way people lived in it, proving that design always has communicated on an emotional and cultural level in our society in a very direct and immediate way.

I visited Kartell’s offices located just outside of Milan in September and saw a few of the company’s early products on display in the expansive design museum housed there. A surprising number of the objects dating back to the 1950s have retained a strikingly fresh, contemporary feel. This timelessness is a quality that Luti acknowledges as one of the most important aspects of what he terms “quality design.”

Since Luti took control of the company in 1988, it has expanded rapidly; under his watch, 100 flagship stores have opened in 85 countries. The first Kartell store in the U.S. opened in 1999 on Greene Street in New York City, followed by store openings in Los Angeles, San Francisco, Miami, Atlanta and Boston. Luti attributes this success to the company’s commitment to quality by producing pieces that are beautiful, expressive, innovative, and enduring.

This combination of qualities makes for a collection characterized by versatility and strength. Though forever faithful to plastic and its great potential for expression, the company has recently introduced designs that utilize other materials such as wood and metal, bringing a new sensibility to the collection. The Mademoiselle chair, for example, designed by Philippe Stark but interpreted by fashion designer Dolce & Gabbana, features a gorgeous Leopard print adorning its facade. Other recent Kartell designs follow suit.

Kartell products may not be objet d’art—nor are they exclusive, exorbitantly priced, limited edition furniture pieces—but the company has found its own synergy between design and the visual arts. On the one hand, it remains faithful to the design canon by responding to the practical needs of society through the production of utilitarian furniture; on the other hand, each piece in Kartell’s collection exudes the magic of expression normally attributed to art.

California Winemasters – Masters of Giving Back