« The 16 » is located at the angle of rue de Cugnaux and rue Nungesser et Coli, close to the Arènes station in Toulouse. Rue de Cugnaux is a busy street, in the continuity of route de Saint Simon that constitutes a major entrance axis into Toulouse from La Cépière to the Saint Cyprien neighborhood. Rue de Cugnaux is currently undergoing major development. The constructions along the road alternate between existing individual houses and four-story apartment blocks, recently built or still under construction. Contrary to rue de Cugnaux, rue Nungesser et Coli is defined by an urban fabric of individual houses characteristic of the Toulouse area.

The project plot forms a sharp point at the junction where the two streets meet at a roundabout. Considering the context, the project on this particular plot must create an articulation between the developing rue de Cugnaux and the smaller scale rue Nungesser et Coli, whilst still creating an urban facade of an appropriate scale to define the public space of the roundabout.

The 18 new dwellings are split over two buildings. On one side Building A, a four-story apartment block in keeping with the developing scale of rue de Cugnaux and creating an urban facade on the roundabout, and on the other side Building B, an intermediate two-story volume on rue Nungesser et Coli that creates a harmonious transition between the collective buildings and the single-family houses.

Building A is the main building and holds 16 dwellings. The building is aligned on the edge of the plot along rue de Cugnaux and rises to four stories as well as an attic. On the ground floor, the main entrance hall is positioned at the angle of the building whilst the rest of the ground floor contains parking and services.  The apartments are located on the upper floors and are all south-facing with loggias opening towards the inner garden. The apartments on the fourth floor are duplexes up into the attic.

To the south, Building B rises to two stories and is built up against the existing neighboring house along the shared border of the plot. The northwest, northeast, and southeast facades of Building A are the ones facing rue de Cugnaux and the roundabout. They occupy the sharp corner of the plot and create a focal point on rue de Cugnaux. They are clad in brick laid horizontally on most of the façade except on horizontal strips where the bricks are laid vertically marking each floor level of the building.

The northwest and northeast facades feature overhanging bow windows and further mark the urban aspect of these facades. The bow window on the corner section opens up the living spaces towards the street whilst the bow widow on the facade on rue de Cugnaux holds the communal corridors of each level and creates a feature in the streetscape. These features accentuate de composition of the facades on rue de Cugnaux and the roundabout that could one day turn into a square. The project thus redefines de quality of the public space and accompanies the development and evolution of the city in the now and the future. 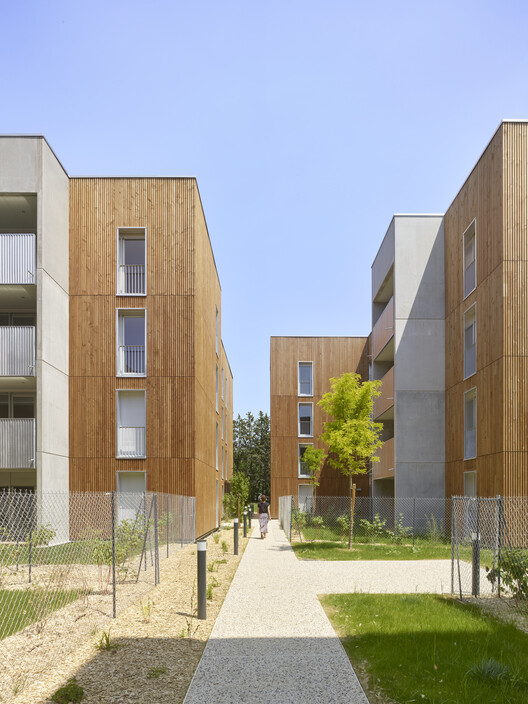