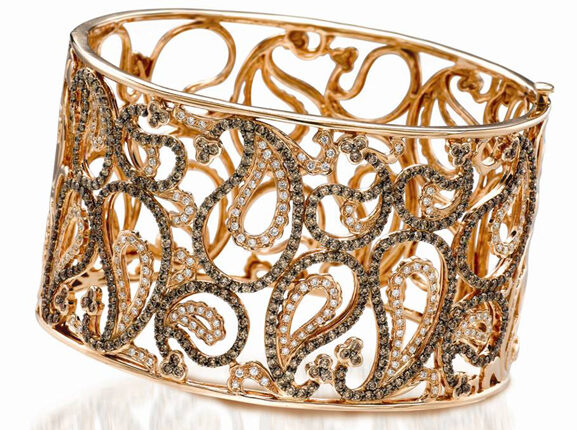 The current incarnation of the family-owned jewelry firm was founded in the US by the late Adulrahim Ephraim LeVian in 1950; upon his death, it passed on to his children. But the family’s “legend” extends back centuries, possibly all the way to Biblical goldsmiths. The recorded history of LeVian jewelers dates to 15th-century Persia. By the 18th century, the LeVian family was so well-known and trusted as goldsmiths and gem dealers that Nadir Shah selected them to guard the Imperial Treasure: unimaginable riches that had been plundered during the Persian conquest of India.

“It deeply affected us; our perception of our roles, who we are and what our mission is,” LeVian reveals. “We see ourselves as the guardians of beautiful gems.”

Together, the family creates 25,000 new designs of jewelry each year for five separate lines of Le Vian® jewelry: Eddie LeVian Signature™, Le Vian® Couture, Arusha® Exotics, Le Vian Time® and Le Vian Chocolatier®. All this is in addition to the company’s extensive archives: Le Vian holds copyrights on over 200,000 designs. “As a designer, I pride myself on being very prolific,” says Eddie. “I love changes in fashion; it offers me new directions.”

LeVian remarks that he tries to pay closer attention to trends in fashion and culture than most established jewelry houses. “This industry can be antiquated,” he says. “We’re trying to redefine our place in fashion. We want to be fashion arbiters.” Le Vian jewels have been seen on the red carpet on musicians like Mariah Carey and young stars like Rachel Bilson and Miley Cyrus, as well as established A-listers like Hilary Swank, Queen Latifah and Halle Berry.

But Le Vian also keeps current with consumers. One major social change he is highly cognizant of is the seismic shift in jewelry buying habits. “It used to be mostly men buying presents for women,” LeVian observes. “Now, more women are buying for themselves and they are buying more jewelry. Men want to make a one-time, investment purchase, something ‘classic’ that their wife will wear for 20 years. Women want to change with the season, like their clothes.”

The new customer for jewelry is a dynamic woman who knows what she likes, knows what she wants and doesn’t like to be told what she should wear. She buys her own jewelry, and Eddie LeVian and his company want to be her jeweler of choice. “Sherrilyn Kenyon is one of our customers,” he says, citing the bestselling novelist as one of these dynamic women. “At the beginning of her career, she bought modest pieces for herself, and as her success grew, so did her Le Vian collection!”

According to LeVian, the current fashion trend is for natural motifs: butterflies, flowers, even snakes and twisted knots. He is creating physically lighter pieces: cut-out designs with open, negative spaces. “They’re easier to wear and they’re eco-friendly because they use less metal,” he explains.

This year, Le Vian will partner with Harper’s Bazaar to present the official fashion show at JCK in Las Vegas. “We have been sponsoring the fashion shows for ten years,” LeVian says proudly. “At first, nobody understood it; they thought we were crazy, but it caught on, and now it is one of the biggest events at JCK: the senior executives of the most important jewelry companies in the world will be there. The show is always standing room only.”

He wants to create loyal, return clients who see Le Vian as a part of their family history. The Le Vian Collectors Club has almost a million members worldwide. “I want my customers to build a collection of Le Vian jewels,” he says. “Then teach their daughters about us.”

Le Vian is also deeply committed to philanthropy, both as a family and as a company. In February, they donated $100,000 worth of jewelry to a silent auction for the Heart Ball in Honolulu benefiting the American Heart Association. Le Vian is a major supporter of Jewelers for Children, an umbrella organization that supports a number of charities for children, including St. Jude’s Hospital and Pediatric AIDS. The company is also working with Mt. Sinai Hospital in New York to fund a fellowship to train doctors in the life-saving technique of live donor liver transplants.

“It is a very delicate operation,” LeVian explains. “They are able to take part of a liver from a living, healthy donor and transplant it into a patient whose liver is failing. Not many doctors know how to do it; we want to help more doctors to learn how and save more lives.”

Life-saving organ transplantation is a very personal cause for LeVian. “Our cousin was suffering from kidney disease,” reveals the designer. “He needed a transplant and he waited and waited for a donor, but they couldn’t find one. My brother, Larry, the chairman of Le Vian, started to look for a donor on his own, and he found someone who had lost a brother to kidney disease and was wiling to become a donor. Today, Larry works with others who are looking for possible donors; he has found matching donors for four more people in the last year!”

Charity is a personal mission as well as a corporate responsibility for Le Vian. Says Eddie LeVian simply, “The more successful we are, the more we give.”