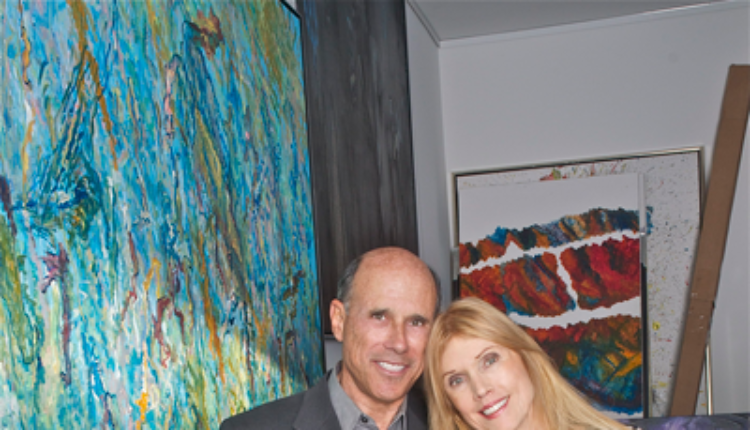 Warning: A non-numeric value encountered in /home/artandliving1/public_html/wp-content/themes/publisher/includes/func-review-rating.php on line 213
63
Share

Painting is more than a picture for artist Lori Hyland. Process, it’s also purpose, an examination and appraisal of the self and the world, an inquiry that is ongoing, painting by painting,with the answers building toward bigger questions — which initiate process and purpose anew, via a different aspect and, hopefully, on another plane. That the result of each query yields a painting often harmonious and aesthetically pleasing is not accidental, but it is as much a byproduct of rigor coupled with a profound appreciation of classicism and its in- herent structure. “I’m an abstract painter, but very committed to being painterly in my discipline.”

It’s serious, seven-days-a-week work that Hyland embraces. “Sometimes when I’m at a dinner party, at something I’ve been very much looking forward to, my mind will still be playing with a problem — well, not so much a problem as a question,” Hyland says, adding that more often than not she’ll head to her studio immediately afterward, often emerging “hours later, my bag somehow still in the crook of my arm and my clothes covered in paint.”

Hyland’s formal training took place fifteen years ago, in New York at Pratt Institute and School of Visual Arts. “I wasn’t a kid, I went to learn to draw,” she says. “I wanted a classical foundation, I wanted to be able to draw figu- ratively and well, and so I did life- drawing for a year. I was not a natural, it didn’t come easily. But I learned the essentials, and that if you scribble in your sketchbook long enough and with discipline, meaning will emerge.”

But it wasn’t until six years ago that Hyland started to paint. The reason? “I’m almost afraid of the question. It’s like asking why I would fall in love. All of a sudden it just landed on me.”

The catalyst, however, is clear. Hyland had been in France hunting for Art Deco furniture, and a friend recommended she visit the great gothic cathedrals — Chartres, Amiens, Notre Dame de Paris, Reims. When she did, “I just went into shock.” Their immensity, their beauty and refined sophistication; their soaring height, lack of architectural precedent and technical virtuosity; the fact that so many were built 1,000 years ago, in a relatively short 100-year time span, and required immense resources and coordination without the benefit of strong centralized governments or organizational bureaucracies; and that many were built on pre-Christian religious sites.

For Hyland they were mirrors and metaphor of wonder, of both the power of creativity and of human potential. It was a eureka moment, one of self revelation, and it both spurred Hyland’s creativity — with images of saints, souls, rose windows, pure color, color wheels and acres of gray stone, which seems monochromatic but are “actually a sea of hues — and inspired her to pick up her brush. “It’s time for me to start to paint, that’s what I realized. It was that simple, plain and undramatic.”

Neither what to paint nor why to paint it were at issue. “I’ve never been that interested in reflecting external reality. The internal has always been my goal. The work then becomes a journal, oneyou’re often surprised by. What it tells you about yourself, the world, and your skill at observing and interpreting the world. There’s great joy and satisfaction in that.” The problem — the question — was how to do it.

Back in Los Angeles, Hyland began working on two canvases. “I spent months on each, I didn’t know how to do them. Then, slowly, came clarity.” What came was a method that provided means to identify and pose subjective questions, and a structure that could answer them. “I composed the paintings out of small grids, grids of color packed closely together to refract color and light. I kept working and reworking the grids, I did it until new colors and light, as well as forms, figures and meaning, started to appear from the chaos.”

While those two canvases now hang as finished paintings flanking the entryway of Hyland’s home, the bigger picture that emerged was process. Not only did Hyland make her first mark (what she says is often the most difficult moment), she then discovered how to proceed — an exploration that has produced series of work Hyland categorizes as “Spirit,” “Dialogues with Nature,” “Jazz Visions,” and the newest, “Ancient Memory, Modern Expression,” which uses ancient iconography from numerous cultures and civilizations as a starting point. “A scientist who works in a very esoteric field gave me schematics, and left it entirely up to me to interpret them. Terrific!” says Hyland, explaining that while each of these series is stylistically and thematically unified, none are (or perhaps ever will be) finished. “They represent different areas of inquiry, they’re open-ended and ongoing.”

Music is also key to Hyland’s creativity. For her, it spins on two tracks. “I’m color driven, but I’m also sound driven. But when I hear music, I see color. Not to an extreme degree, but it has always been so.” Music is also a way Hyland blocks out the noise. “Execution is a struggle, the mind gets in the way, technical skills and non-related ideas can start to hamper. So to quiet my brain

I listen to terrible music.” Not so much a “Stairway to Heaven” as a gateway to her interior, where she can hear the stillness. “We’re all conditional, it’s an unself world. In my work, the struggle is to return to Self.”

That struggle has met with personal and commercial success. Hyland has exhibited in both the United States and Europe—an eponymous show in 2010 at Art Miami in the Timothy Yarger Gallery among her favorite exhibitions. A part of the arts extravaganza that happens annually at the start of December alongside Miami Basel, the fair is the Art World running at full throttle, fueled by commerce, sales and ambition. Heady stuff, where it’s easy to lose one’s head. Not so for Hyland, whose work is almost uniformly one-off and self-driven. “With the exception of one of my paintings, ‘Milky Way,’ I don’t do variations or accept commissions. If you start to duplicate some- thing, you’re making a product.”

Abstraction, classicism; objectivity, subjectivity. On the surface, they seem paradoxical. That Hyland can combine them, and pair them with the trio of her personality, perspective and past, makes for process and paintings uniquely her own.