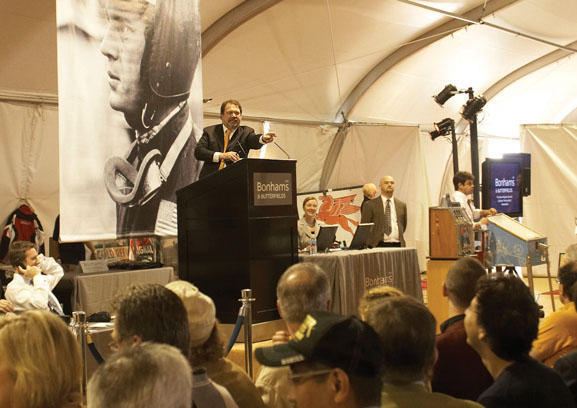 Master of the Gavel

Bonhams & Butterfields, the result of a merger of firms originally based in England and California, is now approaching its seventh anniversary. In addition to cars, the world’s third largest auction house sells the gamut of collectibles and objets d’art: paintings, prints, rare books, watches. In one recent sale, the owners of a London townhouse from the 1680s sold off the home’s “residue” of historic furnishings, garnering $6.5 million.

Bonhams & Butterfields has expanded into 30,000 square feet of showroom and auction space at Madison Avenue and 57th Street. The new space allows for four full-sized showrooms and/or galleries, plus a sales room on the sixth level. Admittedly, the current economic contraction might be a particularly nerve-wracking time to expand one’s showroom space in New York. That anxiety may be especially acute in the auction industry, which tends to track, in an exaggerated way, the ups–and-downs of the economy. Barber seems unflustered, however, pointing out that Bonham & Butterfield’s had been enjoying a record year in the first three quarters of 2008 prior to the market meltdown.

“With the world economic climate as it is, there will be some change in market levels,” he says matter-of-factly. “Some reserve prices will not be in the stratosphere.”

The dark economic cloud may have a bright side for “old-line collectors” who have “found themselves out-bid in recent years,” according to the ever-chipper auction house chief. With super-rich buyers sidelined by the stock market, the auction market may “self-regulate,” says Barber, and prices may return to levels more affordable to veteran buyers.

Barber showed evidence of both salesmanship and organizational skill early on. Born in northwestern England, he hired on to Sotheby’s as a sales clerk in 1969. Within three years, he was manager of the sales office in the firm’s Belgravia showroom, according to his official biography. Barber continued to rise at Sotheby’s, where he became the director of sales for the London office after three years. After running several other showrooms of the famed auction house, he left Sotheby’s in 1995 to join its rival, Brooks. He moved to the West Coast in 2002 to head the newly merged Bonhams & Butterfields while acting as group managing director of Bonhams internationally.

Above all, Barber is a master of slow-simmering, low pressure salesmanship. He makes you feel good about being a collector, or good about starting out as one, even at a relatively modest level. “We have items for collectors who buy in the $1 million range, and for those in the $50,000 range,” says Barber, sounding non-judgmental, almost democratic. One must start somewhere, after all.

Barber, who organized the first-ever automobile auction in Monaco while at Sotheby’s, continues to show a flair for selling rare cars, organizing sales throughout the U.S., including California, Massachusetts, Connecticut and Maine. The master salesman of rare motor cars, however, declines to become a collector himself; the prudent Barber has limited himself to a 1903 Peerless. “I do all the work on it myself,” he reveals.