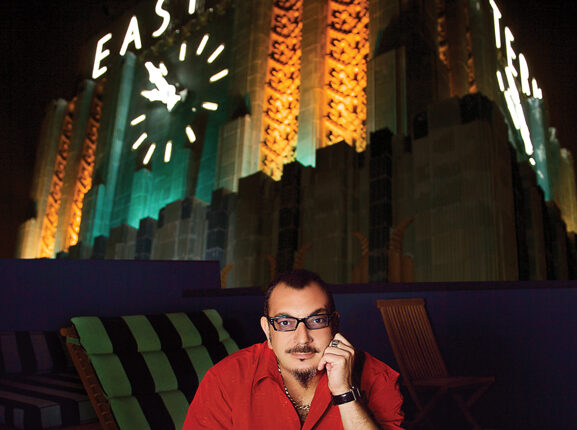 Television is global; art is global. MATTEO’s fusion of the two makes his work appealing on an international level. “Essentially, the medium of television or film is international, and there are very few places in the world you can go that don’t have TV or cinemas,” asserts the artist. “Therefore, what we’re putting together is crosscultural and familiar in terms of time-based presentation of images.”

MATTEO’s work resides in l’espace entre, an interval of existence that resists contextualization though cross-fertilization. Between art and design, between constructed object and fluid light, between static and kinetic, his oeuvre is destabilizing in the best possible sense. MATTEO’s tactilely rich and imaginative work elevates the viewer from the quotidian to higher levels. As Norman Vincent Peale stated, “Imagination is the true magic carpet,” and Matteo’s work takes us on a journey—from the eternal to the contemporary—that mixes and mingles object, image and sound. “I try to weave a consistent thread of visual information in all the films that I make. I use finely tuned, highly stylized imagery that flows as a visually appealing experience reinforced by music or soundscapes that anchor each particular clip and add a cinematic dimension,” he explains.

A native of Toronto, Ontario, MATTEO relocated to Los Angeles in 1992. Inheriting his love of the moving image from his father, the founding chair and 12-year director of the University of Toronto’s Cinema Studies Program, MATTEO started his artistic career creating large-scale interactive new media sculptures in the Nevada desert for the Burning Man arts festivals.

These were hardly MATTEO’s first brushes with visual culture, though. For over twenty years, he has been producing, directing and editing music videos, commercials, short films and video art. He has won numerous design awards for his work as an art director and production designer (www.matteotv.com) in television, music video, stage, concerts and special events, and he has created and designed full-concept commercial venues, restaurants, offices, furniture and residential interiors. This work impressed on him the importance of fine craftsmanship in production.

“The work is grounded in a combination of skills that I have learned in the last 25 years,” he says. “I wanted to create a multilayered genre of art that had endless options. I use the screen as an electronic canvas. The layers, the audiovisual content and the design of the sculptures that display this content converge in unusual, surprising and unsuspecting ways. Visually fusing the imagery with sculpture engages the viewer to ‘experience’ all of this as a whole.” He continues, “I want to bring the work outside the confines of the traditional gallery by placing it in settings that are more accessible to the general public, such as hospitality-based architectural installations.”