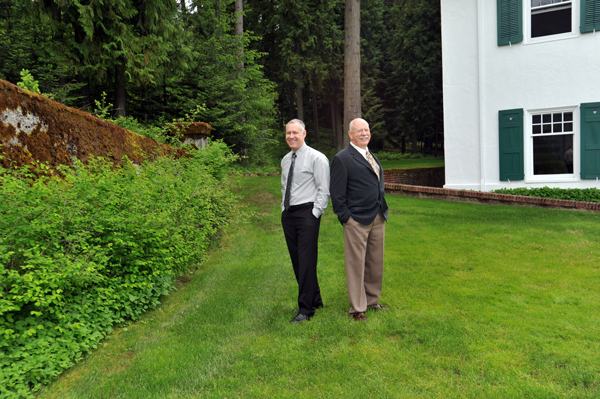 Warning: A non-numeric value encountered in /home/artandliving1/public_html/wp-content/themes/publisher/includes/func-review-rating.php on line 213
657
Share

This is Hemingway country: rugged, yet refined, challenging, yet rewarding. The Clark House, one of America’s most acclaimed bed and breakfast inns, rests on 12 lush acres in Hayden Lake, Idaho, surrounded by unspoiled northern forests, a short drive from the ski resorts of Silver Valley, and Coeur d’Alene, with its famous “floating’ golf course. Listed on the National Registry  of Historic Places, Clark House is more than a prettily restored country inn. It is an important repository of one man’s art, and the center of a century-old mystery.

When owner Monty Danner’s son Mark discovered the property in 1989, the house was on the brink of destruction. Once the grandest house in the entire state, the Clark House was scheduled to be demolished: part of a burn exer- cise for the county fire department. The San Francisco executive and his business partner, Rod Palmer saw something in the decaying Colonial mansion that was well worth the fighting for.

“The floors were warped,“ Danner recalls. “Most of the windows were gone; the hardware had been stripped from all the doors, and the ceilings were crumbling.”

It was an irresistible challenge. “I always loved old houses,“ Danner explains. “It’s always been my hobby. I had owned an historic house in northern California and one in San Francisco. It’s always been a passion of mine.”

He was just as intrigued by the history of Clark House as he was by its architecture. ‘It was originally known as ‘Honeysuckle Lodge’,” he explains. “It was built in 1910 by F. Lewis Clark, a silver magnate from Spokane, and his wife, Winifred. It was patterned after Kaiser Wilhelm’s summer home in Lake Konstanz in Germany.”

In 1914, on a trip to the couple’s winter home in Santa Barbara, F. Lewis Clark put his wife on a train back to Idaho, and vanished. “It was headline news all over the world, says Danner. “He just disappeared. Winifred put up a huge reward, and, at one point, there were thousands of people searching for him. But since he walked out of that train station in Santa Barbara in 1914, he has never been seen or heard from again.”

This chillingly fascinating mystery turned the businessman-cum- innkeeper into a combination historian and detective. Danner has spent years not just restoring Clark House to its former glory, but also learning its history and uncovering its secrets. “Winifred went on living in the house as long as she could, “he continues. “She struggled to preserve the house, but by 1922, the money was gone, and it had to be sold.”

After Winifred Clark died, the house changed hands and purposes again and again. At various points, the former Honeysuckle Lodge was a small hotel, a boys’ home, a restaurant, a resort for Navy officers and a church retreat before it was saved from fiery demolition by Monty Danner’s last minute intervention.

“I worked on it in stages,“ he explains. “I’d get a section of it up and running—I started out as a little bed and breakfast—then eventually added wedding services, teas, and started catering events. It took eight years to finish the complete renovation.” Danner did all of the interior decoration himself, personally selecting the furnishings and accessories for each of the guest rooms and the inn’s grand public areas. “I didn’t want to run a typical B&B. That was too mom and pop for someone with my corporate background. I wanted to create a chateau: a small, intimate hotel, something unique, especially for Idaho. I wanted it to be comfortable; not a lot of frou-frou, doilies and dolls. It’s more masculine and sophisticated.”

The Inn’s finishing touch came about by accident. “I was in Hawaii, several years ago, spend- ing Christmas with my family,“ Monty recalls. “This older gentleman was there, sitting alone. A lady in our party went over and asked him if he’d like to join us.”

It was a serendipitous meeting. The lone gentleman turned out to be Jack McCullagh, a renowned artist and art director for the movies, working for the studios, and for stars like Claudette Colbert and executives like Marvin Davis. “He came to visit Clark House, and saw what I was doing here and offered to paint a series of murals representing the history of the house, and some other subjects that seemed appropriate, like Easter and the Fouth of July.”

Over a period of five years, Jack McCullagh donated the luminous murals that decorate Clark House. Danner is still overwhelmed by the painter’s generosity. “He told me, ‘I’ve worked all over the world and worked for the rich and famous, and I’ve always had to do what they wanted me to do. This is a chance to do what I want to do, and showcase my vision.’ His art sets Clark House apart from ordinary bed and breakfasts.”

Monty Danner’s unique blend of aesthetics and entrepreneurship has created an extraordinary destination for discerning travelers. Its rustic elegance is well worth the journey across the river and into the trees. “It’s a nice life, “Monty Danner says simply.

“I enjoy what I do every day. It’s exciting and very rewarding.”