Text description provided by the architects. The pedestrian and cyclist bridge, which is situated between the city’s historic center and town suburb ‘Zálabí’, connects cycling and pedestrian trails running along both banks of the river. Since it is located near a historic arch bridge, it is also formed by an arch structure, but it has a longer span and it has no supports in the river. The bridge structure consists of two outwardly inclined steel arches, on which a bridge deck from prestressed concrete is suspended. The rise of the arches was chosen so that in the predominant part the arches are situated above the heads of pedestrians, and thus do not obstruct their clear view of the historic city and, at the same time, it does not obscure the view of the historic bridge to people walking along the river.

The bridge deck of a total length of 203.80 m is formed by a continuous girder of eight spans of span lengths from 16.41 to 71.93 m. 5.50 m wide prestressed concrete deck is suspended above the river on steel arches. The span length of the arches is 103.17 m and their vertical rise is 11.25 m. The bridge geometry guarantees that the longitudinal slope on the bridge deck is not larger than 7.70%.

Typical suspenders are formed by steel bars. At the projection of the deck with arches, the mutual connection was formed by movable steel hinges during the erection. These hinges were cast into short blocks when the erection was completed.

The middle part of the bridge was assembled on the bank and subsequently floated to the bridge site, where it was suspended on the erection towers and lifted into the designed position. Then the arch spring and the deck of the side spans were constructed. The design assumption and quality of the work were verified by static and dynamic loading tests.

The bridge forms a semi-integral structural system in which the main load-bearing members – the arch ribs are fixed into the footings and are frame connected with the deck. The deck from high-strength concrete has a robust cross-section that can be easily inspected and maintained, the arch ribs have a closed one-cell cross-section which welds seal the cross-section and guarantee water and air tightness. The ribs have a simple and clean shape and transverse stability is given by the deck suspended on inclined hangers. Therefore, no arch bracing or transverse beams supporting the deck are required.

The bridge, which is situated close to the old arch structure, utilizes a similar structural system, however, its larger span and its clean shape express the progress in science and technology. The structure is light and transparent, and the steel elements are painted grey-green therefore bridge does not overwhelm the existing bridge but complements it. The bridge respects the scale of the city, it consists of elements that have human dimensions, it is comfortable for the users, and its movement caused by the movement of pedestrians or wind does not cause unpleasant feelings to users. The bridge was built with minimal impact on traffic on the river and on the beautiful Polabian landscape. 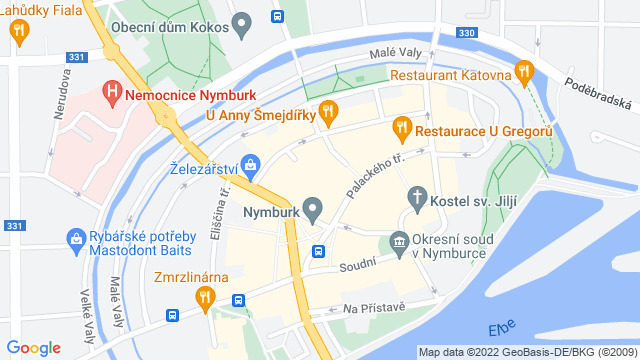 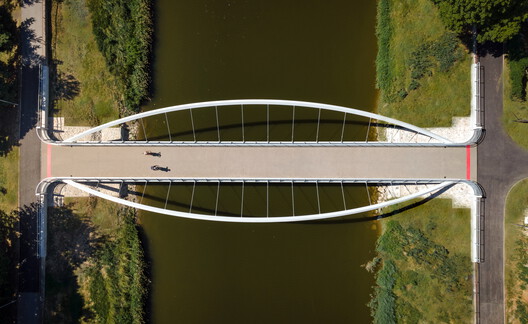