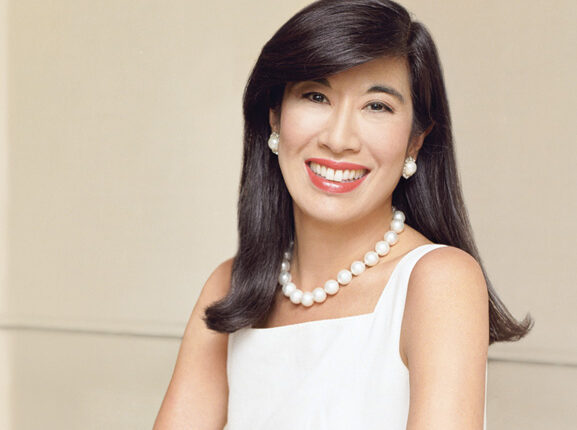 Despite a global recession, she has steered the company to consistent profits the past few years, and she frequents the top of numerous “most powerful women” lists. A Chinese American success story, Jung is the face of a company that continues to radiate optimism about the American Dream and package it for global consumers.

Fluent in Mandarin, Jung is the product of many influences—first and foremost, her parents. “It’s fair to say that my Chinese American heritage has played an extraordinarily important role in my life,” says the business leader, citing her family’s emphasis on patience and perseverance during her upbringing.

“The Chinese definition of long-term is really different than the American,” she elaborates. “In the US, next week is a long time from now. In China, the vista is decades.”

Setting goals and accomplishing them were core values, she confides, even if her first goals were unconventional. A childhood fascination with a set of coloring pencils later became a passion for literature: Jung majored in English literature at Princeton. Her studies in modern feminist literature, which concentrated on Virginia Woolf and Katherine Mansfield, helped define her missions as corporate executive. “The evolving role of women—in art, in writing, in self-empowerment—is very much a part of the ethos of what we’re doing in this company today,” she says.

After college, she took a management training position at Bloomingdale’s, where she honed her eye for beauty and got in touch with her creative side. “Breakthrough innovation is the driver of growth in any business…[that] requires art as well as science,” she asserts.

Sometimes that means championing the unpopular. “You can look at an advertising campaign and five people might say that’s too out there,” she says. “My gut tells me no one’s done that. We’ve got to give that a try.”

China is a key part of both her past and Avon’s future: Avon now internationally sells cosmetics via its direct selling model. And China is particularly significant, says Jung, because the country is “one of our greatest long-term….opportunities…[it’s] not only a burgeoning power but will continue to lead the world.”

She is also true to her commitment to women. “One of the legacies I’ve defined over the past decade is [our] work to empower women,” says Jung. Aside from providing women an opportunity for financial independence, Avon has given hundreds of millions to women’s health initiatives. “We like to think we do well. But we’re even prouder of the fact that we do good.”

Playwright With The Right Stuff