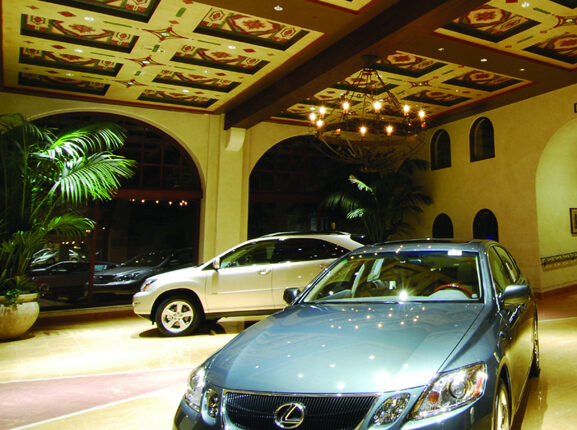 Putting the “Show” in Showroom

As Sullivan explains, the showroom’s similarities to the historic train station on Alameda Street are no accident. “I would go over there [Union Station] all of the time and see what I could implement into the dealership,” the high-spirit- ed owner says about the inspiration for his remodeling effort. It’s easy to see the connection between the two—at Lexus Santa Monica as at Union Station, wood finishing and rough-hewn plaster exude a Spanish Colonial vocabulary with just a touch of modern flair. Where most showrooms are plain and stale, Lexus Santa Monica has pushed the visual envelope and cre- ated an optical carnival for those who can appreciate it.

Sullivan (who, incidentally, owns ten other dealerships) began this architectural journey three years ago when he began noticing the allure that elegant architecture lent other estab- lishments—specifically, fine hotels he had been staying at around the globe. “I wanted to take note of the interior design of the hotels that were $1,500 a night and higher and incorporate that into what I had planned,” he explains.

Because of the high standards of Lexus, Sullivan had difficulty convinc- ing company executives to allow him to make the changes.“They wanted the typical modern look,” he says, pausing. “It’s nice—but not for me.”

Of course, the exquisite space that resulted from his renovation would not have come about without the masterful design tasking of architect Don Wheeler of RTK Architects, who had his work cut out for him.The original showroom, previously owned by Mitsubishi Motors and acquired by Sullivan with the sole intention of rebuilding, had to be gutted entirely.

Because of the age of the original building, Wheeler explains, the proj- ect was particularly complex and kept both the architect and the owner on their heels throughout. Strangely, during the renovation, crews working on the building discovered that a bathroom in a corner had been enclosed with drywall during a previous remodel.While they were surprised to see the sink and toilet still there, what they found next really shocked them—a 1969 newspaper with Sharon Tate on the front had been left behind, adver tising a movie the actress was in shortly before her brutal death.

In a sense, Lexus Santa Monica is to luxury car dealerships what estab- lishments like Wynn Las Vegas have been to high-end hotels: the zenith of elegance and the representation of utmost attention to detail. From the ceiling in the entryway—where individual, hand-painted panels juxtapose large, dark, hardwood doors—to the creamy beige walls, no stone was left unturned and no corner was left without thought in the design.

In other words, the integration of the automotive and the architec- tural has never been so seamless.

Ed Welburn Interview, Part 1: How I Became A Car Designer