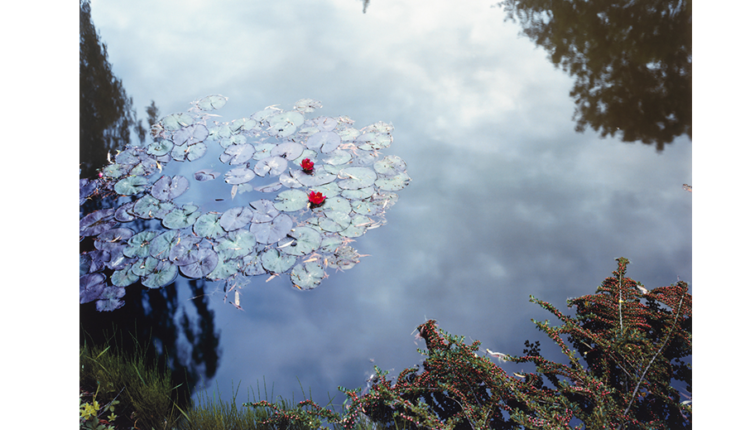 “We are thrilled to be showing Stephen Shore’s entire series from Giverny for the very first time, work by a photographer whose remarkable vision has shaped the evolution of the art of photography over the last several decades,” says Gallery Director, Kathleen S. Bartels. “The Giverny Portfolio captures with uncanny ability the gardens’ manifold variations in flora, texture and light that captivated Monet nearly a century ago.”

The photographs featured in Stephen Shore: The Giverny Portfolio were originally commissioned by New York’s Metropolitan Museum of Art to document the revival of Monet’s gardens following extensive restorations. Shore made several visits to the site over a five-year period between 1977 and 1982 to photograph it at various times of the day and in different seasons.

“Shore’s care with composition and form in his work echoes both the form of the gardens themselves and the intense looking that occupied Monet,” says Ian M. Thom, Senior Curator—Historical.

In the 1970s, Stephen Shore (b. 1947, New York, NY) came to be associated with the New Topographics, a group of photographers whose work broke with traditional representations of landscape with unromanticised, dead-pan depictions of industrial and suburban locations. Shore developed a distinctive snapshot aesthetic in his photographs of everyday scenes in America. He was also one of the first fine art photographers to champion colour film in this period, when colour photography was still confined to the domains of advertising and fashion. In 1971, at age twenty-three, Shore became the first living photographer to have a one-person exhibition at the Metropolitan Museum of Art, New York. His work has been exhibited widely in North America and Europe and is held in the collections of major art institutions internationally.

Stephen Shore: The Giverny Portfolio is organized by the Vancouver Art Gallery and curated by Ian M. Thom, Senior Curator—Historical.

Alexa Chung has long been a fixture on the fashion scene as model, writer and TV host