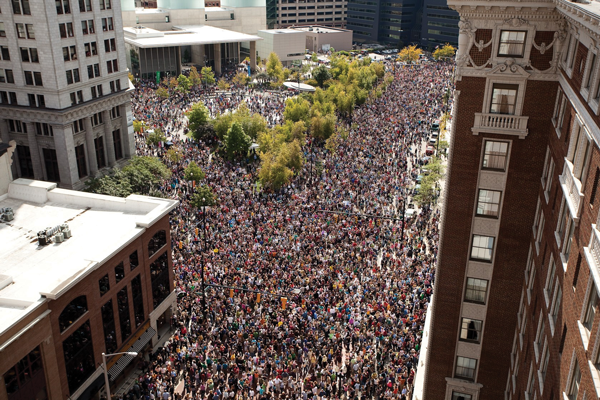 Warning: A non-numeric value encountered in /home/artandliving1/public_html/wp-content/themes/publisher/includes/func-review-rating.php on line 213
584
Share

Rick DeVos is intrigued with in- novation and creativity. He calls himself a “social entrepreneur,” defined as “someone interested in starting things up under conditions of extreme uncertainty.” After a few entrepreneurial ventures, he had a novel idea to revitalize the community using the city’s distinct connection to contem- porary art as the hook. “The idea for ArtPrize,” he says, “came from Spout.com, one of the first niche social networks, and developed from many of the film festivals we attended.”

ArtPrize has launched careers — and givenGrand Rapids a lot to talk about. The first ArtPrize became reality in September 2009 after a mere six months of planning. Today, with 1,582 artists and 164 venues participating in the 2011 competition, it has transformed the city into an art happening. Says DeVos, “You couldn’t go anywhere without hearing people talking about and debating art.”

The annual contest has grown to include eight Exhibition Centers, local art and culture institutions which have agreed to professionally curate their spaces and serve as destination points throughout the city. Each are required to host at least 25 artists and many have restructured their fall exhibitions to solely focus on ArtPrize

Contest rules are simple: you must be 18 or older to enter and your work must be exhibited in Grand Rapids, but, says Rick, “your display could be in the hallway of a building — in an elevator. We don’t put limits on it.” Any place in Grand Rapids could be a venue, creating a surprise around every corner of the three-square mile downtown area.

Anyone who comes to Grand Rapids can vote on his or her favorite work via the web, smart- phone app or text message. There are 10 winners, with a grand prize of $250,000. Award money comes from a family foundation.

To some, ArtPrize may be an art sequel to American Idol, but it’s getting serious recognition by the art establishment and interna- tional art world, who see it as a MacArthur Grant-style program for artists. Many of the area’s leading businesses as well as finest art museums and schools use ArtPrize to recruit and participate.

Born and raised in Grand Rapids, Michigan, DeVos fueled his imagination by visiting 30 countries by eighth grade. As a student of mass communications at Pepperdine University, DeVos began his fascination with social networking, but he never dreamed his contest would rock the art world or turn his hometown into an international art destination.

But it has, and the results have helped motivate artists from around the world to experiment with time and space in downtown Grand Rapids.

Joining artistic forces for this year’s ArtPrize event are New York collaborators Carole Feuerman and Ron Burkhardt, who think ArtPrize could turn into the “Academy Awards of the Art World.”

Feuerman, who has won numerous awards worldwide, is known primarily for her hyperrealistic sculptures of swimmers. She has had six museum retrospectives and is represented by more than 15 galleries. Her work is in the permanent collections of 20 museums and in the selected private collections of His Majesty the Emperor of Japan, President Bill Clinton and Secretary of State Hillary Clinton, Henry Kissinger and Mikhail Gorbachev. In recent years, Feuerman has directed her focus to the public realm and creating monumental public artworks.

Ron Burkhardt is an internationally recognized painter whose works have sold at Sotheby’s and won more than 200 creative awards. Burkhardt started painting in 2001 after a high-powered career running New York ad agencies. Inspired by artists such as Jasper Johns and Jackson Pollack, the abstract conceptualist is founder of two contemporary American art genres — Notism and Earth Art. His Notist paintings, which have been likened to Art Brut, Miro and Klee, are Basquiat-like collages of half-finished numbers and notes scribbled on brightly- painted canvases. Their entry is a “startling fusion of abstract and hyperrealist.”

Next Steps for Rick DeVos

Since ArtPrize, DeVos has launched other social experiments focused on producing a culture of entrepreneurism in Grand Rapids. Among these are 5×5 Nights — five local entrepreneurs get five minutes to present a creative idea before five judges. The “best idea” winner gets $5,000. There is a serious mission: DeVos hopes to solve large cultural problems, revitalize a struggling community, and build a city “really engaged with creativity and risk-taking.