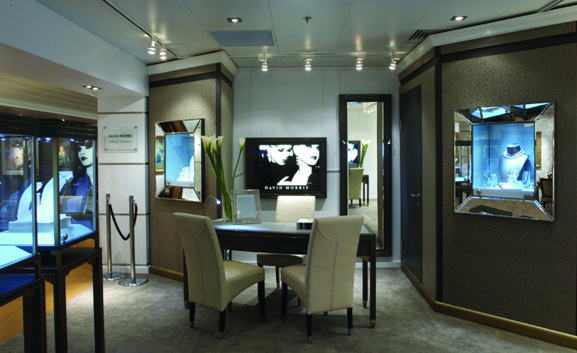 Warning: A non-numeric value encountered in /home/artandliving1/public_html/wp-content/themes/publisher/includes/func-review-rating.php on line 213
286
Share

After years in the making, David and Lee Ann Lester’s traveling art fair has dealers and collectors growing their sea legs.

Christened the Grand Luxe, the 228-foot SeaFair Art Yacht was unveiled this fall as the world’s first floating art and antiques gallery. While it may at first feel a little like the set of a James Bond movie, the ship is a bona-fide sales venue for clients who are invited aboard to consid- er art represented by a variety of international dealers in the ship’s 28 galleries.

Plainly, it’s an art fair with a maritime twist. But it’s also so much more—it’s the years-in-the-works brainchild of David and Lee Ann Lester, founders of the Palm Beach International Fine Art and Antiques Fair and Art Palm Beach (now PB3). After selling these ventures in 2001, the couple considered themselves semi-retired—that is, until something new came their way.

As Lee Ann explains, the development of the floating ar t fair concept was “partially in response to the impact of international travel after 9/11. Many European dealers expressed concern that Americans, including regular clients, were no longer leisurely traveling abroad for art and antique buying trips. They asked David and me if there wasn’t some sort of other exhibition business model that could take them (the European deal- ers) to more cities other than major markets like New York and Chicago.”

And so began the Lesters’ three-and-a- half-year study of smaller, land-based fair ven- ues in hotels, ballrooms and alternative set- tings like Aspen and the Hamptons.

But the couple simply could not find appro- priate space or locations. In their quest, they underwent hundreds of hours of research and market analysis to identify the demographics and buying habits of each market, large and small, among collectors and compared those with the interests of dealers.Their survey for a short time even considered a series of customized, train-car art galleries; they soon realized, however, that train routes were often too far away from known high-density luxury markets to make sense.

The spark for a seafaring art show idea came about partly from the Lesters’ own love of luxury boating. After determining that an art yacht was indeed viable, the two embarked on a new busi- ness model that would turn the art fair concept inside out. Instead of assembling an art fair in one place and having collectors come to it, SeaFair would literally “ship” the art and antiques show to the collectors.

Accordingly, Seafair’s custom-made, $60-million Grand Luxe yacht travels along the Eastern Seaboard from Miami to Maine and back, docking in dozens of cities along its route and allowing visitors nearby to come and browse its wares.

Designed by internationally known and award- winning private yacht designer Luiz de Basto, Grand Luxe utilizes shallow draft construction, which enables it to dock in less than eight feet of water and makes it possible for the ship to come to port in inti- mate locales like Chelsea Piers, Martha’s Vineyard, Cape Cod and Nantucket. Among the boat’s chic amenities are a caviar and champagne bar, a sky deck, a lounge and two restaurants.

Lee Ann sees the yacht she and her husband have created “as a way for collectors who have wonderful collections in their home, but do not travel to the art shows at the Armory in Manhattan, Miami Basel or Austria to meet inter- national dealers. It also breaks down a lot of the intimidation a collector may feel going to a high profile, crowded art fair or having to visit multiple galleries.” She cites that dealers also benefit by having the opportunity to reach new markets without interfering with their usual selling season.

Since the art yacht’s inaugural cruise in September, dealers have exhibited a full range of artwork. On one recent leg of the SeaFair tour, collectors could view a Daum Nancy-enameled Cameo glass vase from A.B. Levy in Palm Beach, Yayoi Kusama’s signature paintings of polka dots and nets from Galerie Piece Unique in Paris, South American artifacts from Santa Fe’s William Siegal Gallery, Art Deco furniture from Two Zero C Applied Art in London, and uncommon vintage color photographs of Marilyn Monroe from Martin du Louvre in Paris. On another leg of the tour there were 17th-century Dutch master paint- ings from London’s John Mitchell and Chinese porcelains from Cohen and Cohen, also from London. When the SeaFair docks in December for the event-ful Art Basel Miami international art show, dealers will coordinate with the theme of the show by focusing on 20th- and 21st-century masters in modern and contemporary art, design and sculpture.

Some dealers are waiting to see how the Art Yacht fares before commit- ting to the usual one-month gallery rental. For dealer Mark Borghi, who special- izes in American Modernism, his concern is “having the time to be on board for a month while maintaining the gallery in New York,” along with his galleries in Bridgehampton and Los Angeles. Borghi is considering a space and “likes that the SeaFair goes to places where people don’t usually go to art fairs.”

For other dealers, it may be a question of cost—the gallery rent per square foot makes it one of the most expensive art fairs in the world. For collectors wondering if they will pay more on the SeaFair, Lee Ann assures “that dealers do not increase the price of their works to cover the rental. I’ve never seen a dealer charge a different price in their gallery than at a fair. Prices are universal so dealers cannot really charge different prices just because of the venue, whether it’s an expensive space or not.”The SeaFair’s WiFi internet connection gives collectors who bring their laptops on board the ability to research, check prices, and communicate about purchases knowing they have the latest informa- tion at their fingertips.

The first in a series of on-board art lectures is set for this winter when SeaFair is docked in Miami for Art Basel.The lectures, to be presented by local art consultants, are slated to speak to the theme of the show and interests of collectors.The Lesters are also arranging benefits for local museums by hosting fundraisers and other events on board.

Q and A: Paul Gray