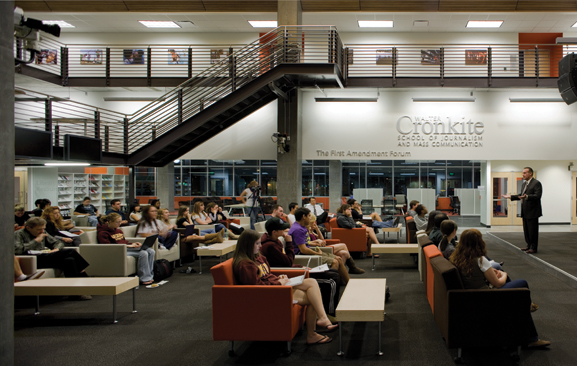 For the Cronkite school—part of Arizona State University’s new campus in the city—the architect has found a style suitable for the blazing heat and razor-cut shadows of the Arizona desert. The school is a tough-looking but elegant building, covered in corrugated metal panels, glass and masonry and supported by concrete columns. The six-story building is also a workhorse, containing space for a daily newspaper and a working television station with two sound stages, as well as classroom space. The Cronkite School is a highly public building with an immense interior atrium, its walls emblazoned with the words of the First Amendment. Equally public is an outside plaza with open-air seating just a few feet away from the new Phoenix light-rail train.

For Santa Monica-based Ehrlich, best known for houses and public buildings that express the sensuality of Southern California, the work in Arizona represents an expansion of his creative range. The building also adds some oomph—that is, a burst of color and life—to an emerging
district of Phoenix just now beginning to fill in. For a hot town, Ehrlich brings a welcome breeze of California cool.