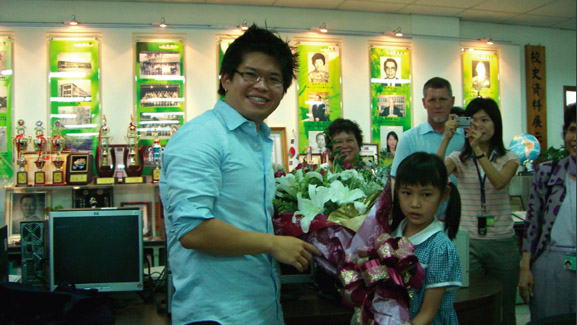 When Failure Is An Option

Acquired by Google for $1.65 billion just eighteen months after Chen Googled the domain name for availability, YouTube’s exponential growth demonstrates the reach of a creative idea at the confluence of market need (sharing videos online), technological possibility (broadband penetration, embedding ease) and entrepreneurial chutzpah (Chen’s credit card limit). In the explosion of kooky baby videos and do-it-yourself tutorials that followed, the site’s open format has also given voice to a generation’s creative expression. And while other companies offer similar services, YouTube remains the global standard bearer for the video space, serving a billion clips daily (this, while respecting the vagaries of global cultural diversity and the ever-changing minefield of copyright concerns).

“I look up and I’m just astounded…Watching the news just recently…All three prime time news events actually featured a YouTube video!” marvels Chen, who finds it just as remarkable that his brainchild is only five years old.

But now, with the responsibilities of Chief Technology Officer and the blur of 130-hour workweeks behind him, Chen has quietly exited the company he helped forge. Though still a consultant with Google’s venture arm, he’s looking to explore new ideas away from the restrictions of a global brand. And how does he follow up a success so historic?

“The expectation is there for any…serial entrepreneur to do something…world changing,” he says. But “it would be a mistake from the starting line…the next start-up…to say we have to get this to be bigger than 100 million users.” A simple need to share his personal videos gave birth to YouTube, and Chen continues to search out vacuums in the marketplace in the same organic way. It’s as basic as “here’s a problem that we face and maybe other people will have that same problem, too.”

As Expo 2010 Shanghai shines a light on his father’s birthplace, Chen reflects on his own Chinese heritage vis-à-vis his classically American success story. Though he embraced an entrepreneurial spirit, he thinks that the very culture that instilled his solid work ethic is also traditionally risk averse and “historically…less forgiving when it comes to failure.”

Chen sees this trend not just in the U.S. but across Asia, noting that the legion of talented Asian Ph.D.s populating tech firms worldwide are less likely, “proportionately,” to take a chance at the helm of their own start-up. Having said that, he’s quick to point to the entrepreneurial revolution brewing in China, saying that it will be an interesting place to watch for the next five years.

In the meantime, Chen proselytizes from the book of YouTube. Had he followed the “traditional” path, he’d never have left his job at PayPal to max out credit cards to disseminate pet videos. And though he knows that failure is more often the norm, he hopes to instill an openness to venturing beyond the comfort zone in the consciousness of the broader Asian community. “That’s something that I’ve been putting my mind into trying to bridge,” he says. “In Silicon Valley…The acceptance for failure is a lot higher. It’s fine if you fail here. It’s fine if you fail twice, three times…As long as you’re getting ready to bat again.”

At the Drawing Table