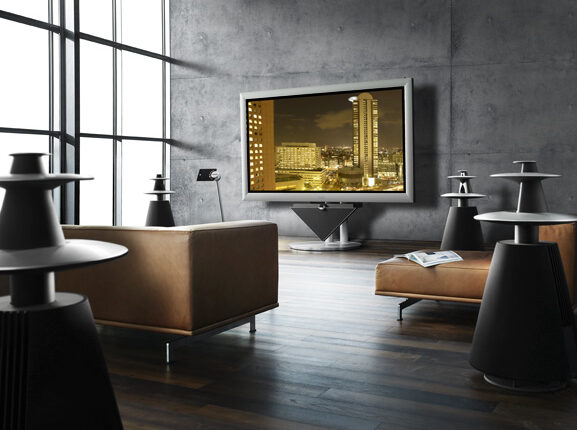 Bang & Olufsen’s commitment to audiovisual expertise hasn’t wavered in 84 years. The company’s headquarters is still located in the Danish countryside, where founders Peter Bang and Svend Olufsen first began in the attic of the Olufsen family estate in 1925.

For now, the sleek cylindrical BeoSound 5, designed to navigate all the digital music that’s stored on the black, rectangular BeoMaster 5, has captured the public’s imagination. Since most music now is digital and without album or CD covers, it’s no longer tangible. Screen graphics have been introduced to return physical navigation to the user. In addition, the BeoSound 5 allows its user to browse similar music, selections from the favorites list, and thousands of Internet radio stations.

“BeoSound 5 and BeoMaster 5 represent a new technological platform grounded in the digital world that naturally will be an integrated part of many products from now on,” explains B&O designer Anders Hermansen.

Another favorite, the modern aluminum BeoSystem 3, acts as a central hub that can connect to cable and satellite, high-definition DVD, surround-sound, game consoles, digital cameras and MP3 players through modules that talk to one another. It automatically controls curtains and lighting while constantly analyzing the electronic data it receives to adjust picture and sound quality for an optimum experience.

The company values employees like Peter Petersen, senior director for business innovation, who has been with B&O for 31 years and oversees a staff of 400 mechanical, acoustical, software, and electrical engineers. B&O’s engineers and designers aren’t lacking in good ideas. Often, it’s a case where “the technology has to catch up with the research,” says Petersen.

It can take anywhere from three months to as many as 10 years (as it did with the BeoSound 9000) to work out the kinks of a new product and get approval from top management. Ideas come from trade shows, conventions, visiting universities and competitors. “Sometimes the designers inspire and challenge us,” remarks Petersen.

A hallmark of B&O design is the ability of its equipment to deliver the same superior sound no matter what environment it’s placed in. TV screens adjust to wherever in a room a viewer is seated, and when screens are lowered, sensors recognize foreign objects—i.e. babies and pets in harm’s way—and a safety feature stops the command before an accident happens.

The automobile industry has embraced B&O’s superior sound systems in various luxury brands: the first was the Audi A8, followed by Aston Martin and the Mercedes SLS AMG, the latter of which was launched in early 2010. Each system was custom-designed to create a “concert hall in a car,” says David Lewis, chief designer for B&O.

Lewis pulls ideas from everyday life and auto design to create products with Bauhaus influences. “I try to combine technological excellence with emotional appeal,” he says. “We make products that make sense to people.” Indeed, B&O products are designed to be beautiful yet unobtrusive. Paul Schayk, a New York City businessman, bought his system because “it’s not just electronics. It’s furniture and functional art.”

Peter Skak Olufsen, who served as B&O’s chairman of the board for 12 years and is now a board member, vouches for his company’s strides forward. His uncle “would be pleased to see B&O today. The company is consistently growing and that was part of the original vision for him and Peter Bang,” he says.

For the foreseeable future, the company stands by its “unique focus on design combined with the ultimate quality in sound and picture as well as user friendliness—values that make us stand out in a crowd,” says Nielsen.

Supercell ending development on Everdale after it falls short of expectations