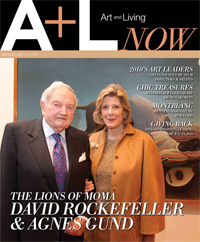 Warning: A non-numeric value encountered in /home/artandliving1/public_html/wp-content/themes/publisher/includes/func-review-rating.php on line 213
1,932
Share

Their recognition goes beyond the general public; their fellow famous peers praise their legacy. “David Rockefeller represents the best in the long and glorious Rockefeller tradition of philanthropy,” Philippe de Montebello, the venerated former director of the Metropolitan Museum of Art, says. “His is hands-on philanthropy, deeply engaged in the institution his family founded and nurtured without ever compromising its curatorial independence. His interests are wide-ranging, and his influence will be felt for long in the future.”

“Aggie Gund is a model philanthropist, fully engaged in the projects she supports and encourages,” de Montebello continues. “She is a modern woman in every sense of the word, deeply committed to education, to modern and contemporary art, to the human side of the intellectual and artistic life of this city and beyond.”

Mayor Michael R. Bloomberg puts it in perspective. “Few people have done as much for New York City as David Rockefeller and Agnes Gund. Though it would be impossible to mention all of their philanthropic efforts, their relentless and visionary work on behalf of MoMA is a stunning reminder of what great New Yorkers can do. Their impact on the city—and our cultural heritage—will be felt for generations,” he comments.

The Rockefeller involvement with MoMA began back in 1929, when Abby Aldrich Rockefeller, David Rockefeller’s mother, and two associates, Lillie P.Bliss and Mary Quinn Sullivan, helped to start a museum of modern art by renting seven rooms on the 12th floor of the Crown Building at Fifth Avenue and 57th Street, then called the Heckscher Building.

Born and raised in Cleveland, Ohio, Gund was fascinated by art from a young age. She was invited to be a member of the International Council in 1968 and was named a trustee in 1976. She served as chairman of the board from 1993 to 1995 and president from June 1995 to 2002, when she was named president emerita.

In response to New York City schools’ budget cuts in the mid-1970s, Gund founded “Studio in a School,” which provides programs to more than 120 schools throughout the five boroughs, bringing over 90 professional artists who devote 45,000 hours to more than 25,000 pre-kindergarten through high school students.

Sitting with these two friends, who have served together on MoMA’s Board of Trustees for over 33 years, is like being with the yin and yang of art philanthropists. Gund easily speaks her mind; Rockefeller is diplomatic. Gund has a natural gift for social relations; Rockefeller is more introspective. Both share a passion for art, donating and sharing that is birthed from the inner core of their beings. Their lives are a tribute to their generosity of time and money, as well as to their concern for the public’s interest and education.

Art and Living: Mr. Rockefeller, you have an acclaimed art collection that you have willed to MoMA. Can you discuss your attitude towards this philanthropy?

David Rockefeller: I think great works of art by some of the great artists of the world, in many respects, belong to the world at large. I feel very privileged to be a present owner, but I also feel responsible to making them available in one way or another, even while I am alive. For example, I loaned a collection to MoMA years ago and have lent individual paintings to museums around the world. I just think that I am privileged to enjoy them, but I recognize that they really are objects that should properly belong to the world.

Agnes Gund: I’m very fond of MoMA because I love it so and love the people who work in it and, of course, the art. David loves, as well as the art, all that is given to the museum. He has taken interest sometimes in things you wouldn’t think he’d be interested in, and he likes to learn. He takes the time to go around with the curators and look at their shows and asks questions.

DR: She has for many years been a guiding force in the museum’s efforts to extend its services to a larger, more diverse public, and it still holds true today.

AG: I admire David more than almost anyone I’ve ever met as far as really being able to have a life of his own and have a life where he makes so much difference to people. He’s so smart about what he does and is so kind. David’s biggest strength is his love of MoMA, a real love that doesn’t stem from just his mother’s interests and his mother establishing MoMA in 1929. But I think it really comes from his deep commitment to it as an individual, a person who has had an introduction to hundreds of non-profits but really has honed his interest down to a few things.

A+L: Mr. Rockefeller, what does your family’s longtime involvement with MoMA mean to you?

DR: I feel very proud of the family’s involvement with MoMA from the very beginning with my mother and very soon thereafter, when my brother Nelson became one of the earliest major supporters. And not long thereafter, there was myself and my sister-in-law, Blanchette. I like to think of myself and a substantial number of our family as having been privileged to play a role in this great place. It is an organization that has meant an enormous amount to our family because we believe in what it is doing and because of the leadership of the staff for making it what it is today. It’s a wonderful place, something that New York and the country can be proud of.

A+L: How is the Rockefeller family continuing its involvement with MoMA today?

DR: My son, David Jr., is on the board and I am honorary chairman. It’s a delight to me that the family’s interest, started from the beginning, is actively continuing. I am very proud of the fact that our family continues to play a role.

A+L: Tell us about your involvement in MoMA’s 2004 renovations.

AG: When we had the campaign to raise $858 million for the new construction, complete rebuilding and renovation completed in 2004, we needed helpers and funders. At first, David and I sat down and decided who these would be. That’s why I think David’s strengths are remarkable. He does something very few people do. He likes to fund raise. He wants to go out and look for people. He wants to help in it. And, of course, as others have said, we could have never built this building without David. But it could only have been with David, because he was willing to ask a lot of people for help. He was very willing to have lunch or dinner with them, willing to go out and travel to meet with them.

A+L: What are your views on the state of philanthropy in America and in New York City today?

DR: The concept of philanthropy is one that was really developed in this country. In Europe, private philanthropy has never been of great interest, and there have been relatively few philanthropists in the past. In this country, starting with people like Andrew Carnegie and my grandfather, the concept of the obligations and responsibilities that people who made money have to society should be taken into account by those who have the money. I think it is fair to say that no other country’s private citizens have been as generous continuously for the past hundred years as in this country.

AG: Strength breeds strength. New York is so good because New York has such great institutions and that attracts people who want to help. The better the institutions get, the more they seem to attract people and donors to them. People like excellence, so they give to where they get the best. In many of the museums in New York, you get the best of what you can see, so you get people attracted to giving to them.

DR: You’re very generous, Aggie. There are, happily, large numbers of people in New York who are wealthy and give generously, including our mayor, Mike Bloomberg. He is a generous philanthropist and sets a great example. I’m glad that I help. I am proud to say that the role started by my grandfather and father is being continued even by the fifth and sixth generations of the family who are playing an active role. They have created their own foundation with the family fund. And the Rockefeller Brothers Fund is being supported and continued by fourth and fifth generations of our family who are actively playing a role.

AG: I think this museum has done better than most museums in the country. It’s been phenomenal what our staff has done here.

DR: On the board of trustees, we are fortunate to have so many experienced and capable financial people.

AG: The investment committee came together to talk early on with the financial committee about what to do with what looked like it was going to be a recession. The trustees really gave so much in donations of funds and art. We have one of the best boards of trustees. They really work on their committees: head them, gift them, come to meetings, talk to curators and have interaction with them. Some museums don’t want to bother with trustees and wish to report to them, not work with them.

There is such a synergy of working here, and David has put so much time into making all these aspects work. Luckily, we have so many good shows and so much going on in the museum that is of interest, that we have increased memberships this year.

A+L: Ms. Gund and Mr. Rockefeller are pictured in front of one of the best-loved works at MoMA, Henri Rousseau’s The Sleeping Gypsy. In the painting, the lion stops and appears to muse over the gypsy. But these two lions of MoMA are strongly moving on. Nothing stops them.

The Return of Cool