Edith Somerville lived as full a life as anyone. Having the financial means, she led a life with no barriers as an unmarried author of several books, an artist, and activist for women’s rights.

Born in 1858, Edith Somerville grew up in Ireland as the eldest of eight children. After being tutored at home, she attended South Kensington School of Art in London, Alexandra College in Dublin; Académie Colarossi and Académie Delécluse in Paris; and then the Westminster School of Art, also in London.

When she was in her late 20s, Somerville met her second cousin, Violet Martin. It must have been a fortuitous introduction, as only a few years later, the first of their numerous publications was released. Their first book, An Irish Cousin, was published in 1889. Their books Some Experiences of an Irish R.M. (1899), Further Experiences of an Irish R.M. (1908), and In Mr. Knox’s Country (1915) comprise what is collectively known simply as “Irish R.M.” Our British friends may recognize the title as it was turned into a television series in 1983. The Real Charlotte published in 1894 is seen as their masterwork and they, apparently, took a little inspiration from their own lives for subplots and details within the book.

Their joint pen name underwent a few iterations, including “Martin Ross” for Violet Martin, but they’re generally referred to as “Somerville and Ross” (“Ross” refers to Ross House, Martin’s childhood home). Their collaboration resulted in 14 novels, several short stories, and travel books, as well as myriad essays and articles.

In addition to her work as a writer, Somerville served as an illustrator to her literary works. However, she didn’t illustrate her novels just because she could, she was a competent and successful artist in her own right. Below are two of her illustrations for the Irish R.M. books in the collection of the National Sporting Library & Museum (NSLM) in Middleburg, Virginia. The NSLM actually has two sets of the same illustrations: one set of four is labeled “number 7” and the other is “number 27” in the limited series produced by Derrydale Press. The tonalities between the sets vary slightly, which is neat to see.

Somerville was also an illustrator for popular publications Lady’s Pictorial and The Graphic. Magazine illustrations are hard to identify since they aren’t usually signed. This is a representative image of Lady’s Pictorial advertisement:

She also wrote for Lady’s Pictorial which was then turned into a book, In the Vine Country. The illustrations for it were produced by another artist but based on Somerville’s sketches. 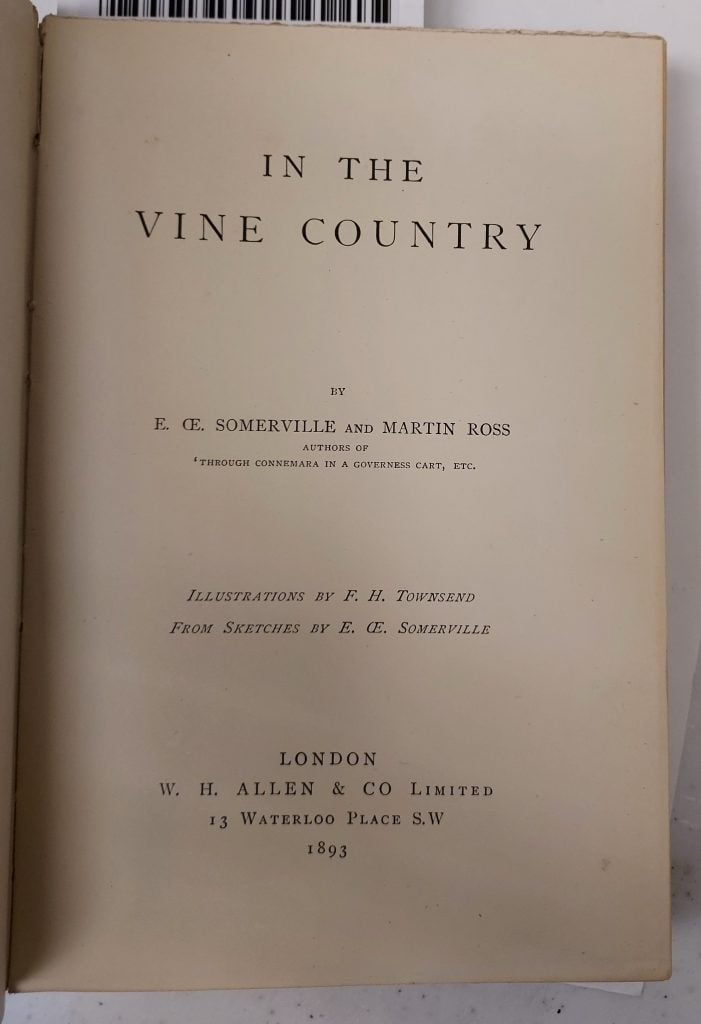 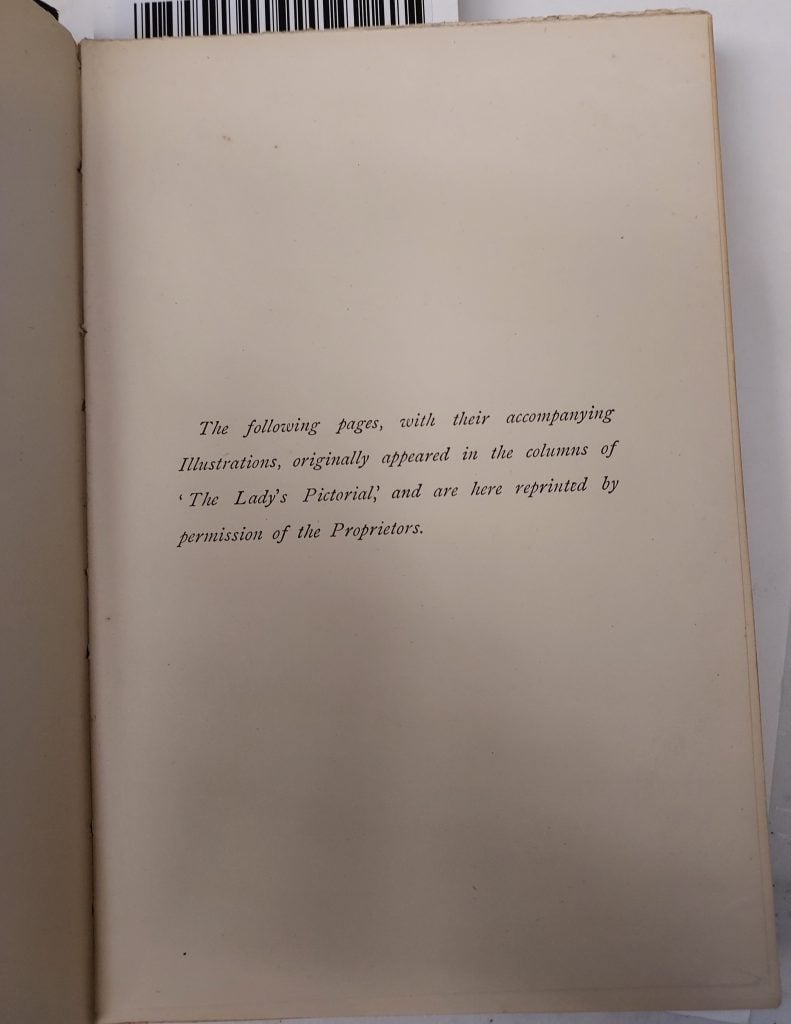 In the Vine Country

Somerville wrote for Lady’s Pictorial which was then turned into a book, In the Vine Country.

In the Vine Country

The illustrations for it were produced by another artist but based on Somerville’s sketches.

Many of her landscapes were in oils and often depicted the Irish countryside, particularly County Cork where she lived.

Somerville’s portrait of Violet Martin is in the collection of the UK’s National Portrait Gallery.

As evidenced in their writing, both women were avid riders and hunters with Somerville becoming a Master of the West Carbery Foxhounds in 1903, which made her the first female Master of Fox Hounds (MFH) in Ireland. When Somerville traveled to the United States in 1926, she hunted alongside the Aiken Hounds in South Carolina, a sporting hub on the east coast. Mrs. Thomas Hitchcock, the Aiken Hounds MFH, was a devoted fan of Somerville. Hitchcock contacted a mutual friend at the famed Derrydale Press publishers in order to republish a special edition of Somerville and Ross books, known as The Hitchcock Editions. As such an enthusiastic sportswoman, sporting and country scenes were frequent subjects for Somerville. 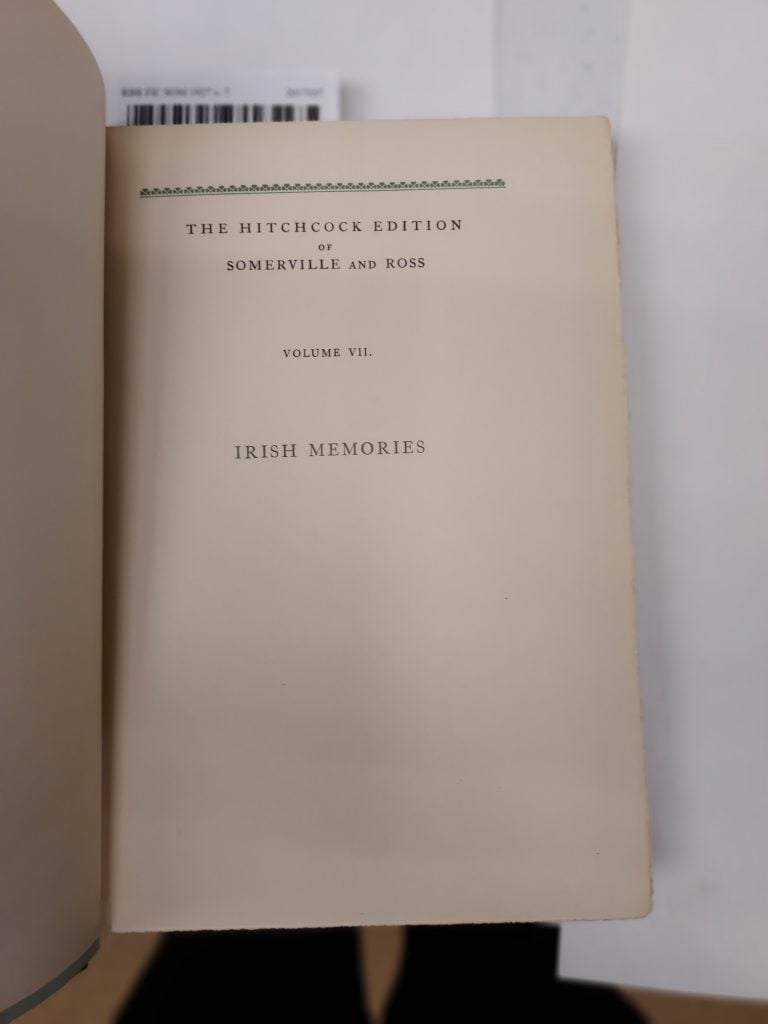 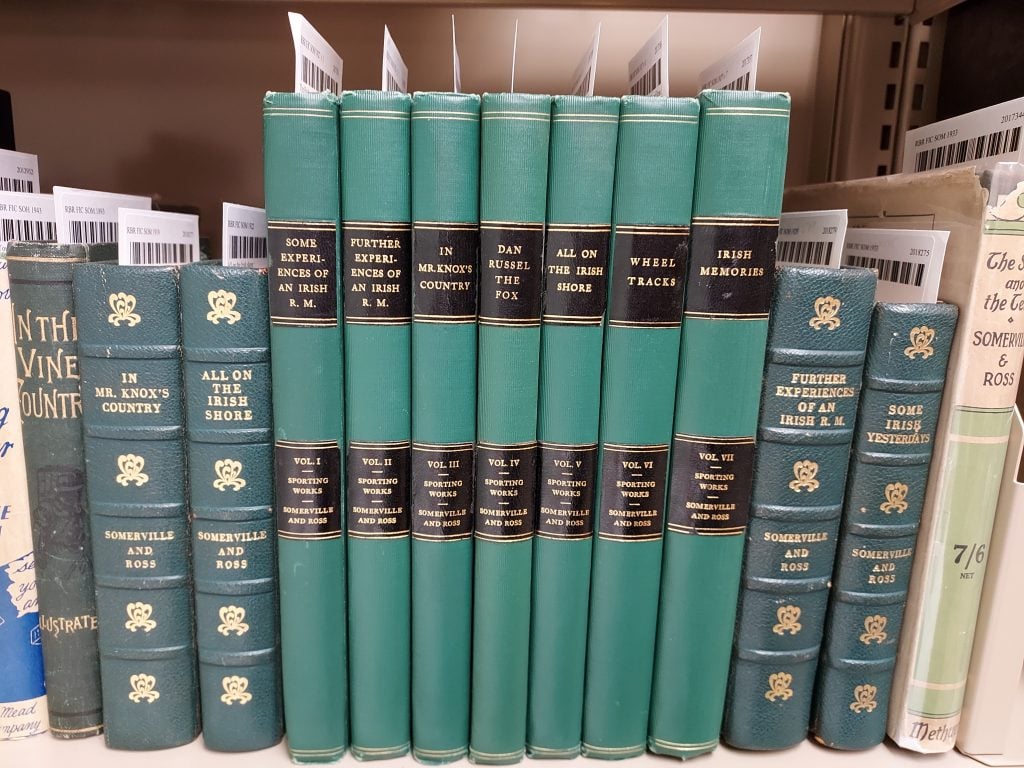 Hitchcock contacted a mutual friend at the famed Derrydale Press publishers in order to republish a special edition of Somerville and Ross books, known as The Hitchcock Editions.

Library view of The Hitchcock Editions.

Somerville exhibited throughout her lifetime including with the Watercolor Society of Ireland, and at the Royal Hibernian Society in Dublin, the Goupil Gallery, and Walker’s Gallery, both in London, and the Ackermann Galleries in New York.

Martin and Somerville were ardent suffragettes and took active roles campaigning for women’s rights throughout England and Ireland and advocating for girls’ rights for education. In 1910, Somerville became president of the Munster Women’s Franchise League and established branches throughout Ireland. They both attended the 1911 suffrage march in London.

Martin died in 1915, leaving Somerville bereft. However, not one to let death get in the way, she attempted to contact her beloved cousin through spiritualism which was popular at the time. The seances enabled them to continue their literary partnership through what is known as automatic writing. This is when the medium writes what the deceased wants to convey to the living. Regardless if the automatic writing was true or not, Somerville continued to publish books under the Somerville and Ross name.

Edith Somerville received several accolades for her life’s work, including an honorary Doctorate of Literature from Trinity College, Dublin in 1932 and the Gregory Medal from the Irish Academy of Letters in 1941. In 1943, she was included in the Irish Exhibition of Living Art. For all her accomplishments and all that she was involved in, art was her constant, and as much as she enjoyed writing, it took her away from her “beloved easel and paint box.”

She died in 1949 and is, fittingly, buried beside Violet Martin in Castletownshend County Cork, Ireland. Her home, Drishane House, is still owned by the Somerville family and is open for tours, along with a museum and gardens.

The Beautiful Gardens of Santiago Rusiñol

10 Things You May Not Know About Édouard Manet