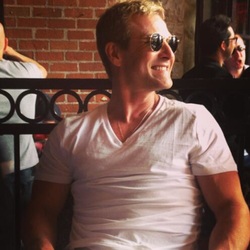 Todd did his undergraduate work at Belmont University in Nashville, Tennessee, where he was Fine Arts major. Very early in his life he realized that he could not isolate visual art from other media and influences in his life. Using as a base he created paintings using a preparation of various base colors. His technique uses a straight edge created from the oil paint creating lines of distinction that signify his distinct style. These equi-spaced lines can be bars for music or lines waiting to be filled with words that will communicate the universality of arts. Then he comes back in to ‘pull the sounds from the compositions’. This was the body of work that set the style for his first solo exhibition/performance.” by Cynthia Penna

“My work has been described in many ways but my favorite was, “Incredible light that comes from the soul of the artist can be seen and felt like violence presented calmly yet explicitly in the work of Todd Williamson. A violent calm that seethes beneath the surface with sexual tension and understanding.” – Todd Williamson
Todd Williamson has been awarded a Pollock Krasner Foundation Award Grant 2010/2011, two Artslant International Showcase Award, Curator’s Choice Award from the Micro Museum, Brooklyn NY, and most recently an Artistic Merit Award from the City of Naples, Italy. He is an Arts Commissioner for West Hollywood and on the Board of Directors for the National Aids Monument.

He was a visiting artist at the American Academy in Rome ’01, the Skopelos Foundation for the Arts ’06 (Greece), the International School ’08 (Venice Italy), and Louise Bourgeois’ artist salon in 2008. He has exhibited extensively both in the US and internationally. He has shown with Ed Rusche, Jenny Holzer, Joe Mancuso, Mie Olise, Donald Lipske, Ed Moses, Laddie John Dill, and Chuck Close.

A Great Documentary – An Ordinary Couple