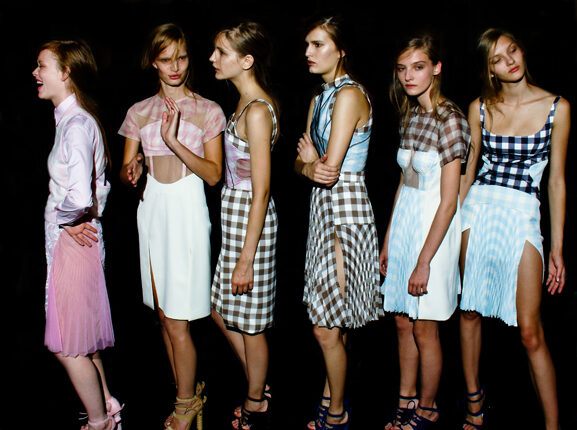 Warning: A non-numeric value encountered in /home/artandliving1/public_html/wp-content/themes/publisher/includes/func-review-rating.php on line 213
342
Share

All eyes are on Somerset House for London Fashion Week

The eyes of the entire fashion world focus on London February 19-23, 2010 as designers, supermodels, fashion editors and celebrities gather in the British capitol for London Fashion Week. Fresh new talents like Holly Fulton, Christopher Kane and Katie Hillier for Giles Deacon ignite the runways side by side with the established stars of British style.

English fashion has never been hotter. With English stars like Kate Winslett, Emily Blunt, Jude Law and Robert Pattinson lighting up movie screens all over the world, British style, in all its quirky, inventive and unpredictable glory, has never been more chic. While fashion observers look to Paris for the purest expression of the traditions of haute couture and to Milan for spectacle and theatricality, they look to London for a much-needed infusion of playfulness and high-frivolity honed into art.

“Each city has its own identity,” says Caroline Rush, the CEO of the British Fashion Council and the driving force behind London’s Fashion Week. “London’s identity is one of experimentation and collaboration. International audiences come to London to experience the London spirit, to seek out new talents and to experience established British brands.”

The “London spirit” is difficult to define, yet impossible to resist. It encompasses the reserved and the revolutionary, the tweedy classicism of Jaeger and the avant-garde eccentricity of Dame Vivienne Westwood. There is a boldness to British design, a willingness to experiment and a fearlessness that is not found in fashion anywhere else. Since the 1960s, the fashion world has relied on British designers for an infusion of cool.

“It would be very difficult to pinpoint one particular designer as the most influential,” says Rush. “So many have been influential in so many different ways. If I were to name my top choices, they would be: Vivienne Westwood, Paul Smith, Alexander McQueen, John Galliano, Hussein Chalayan and Christopher Bailey.”

Christopher Bailey, the design director of Burberry, is credited with revitalizing the once-stodgy, 144-year-old firm, lifting it out of the doldrums and turning it into a global fashion force. Famous for its rugged outerwear, Burberry outfitted Captain Roald Amundsen’s expedition to the North Pole and created the original “trench coat” for British officers in World War I. With its unmistakable trademark beige plaid, Burberry held royal warrants from both the Queen and Prince Charles, but when Christopher Bailey took the company’s helm in May of 2001, the brand acquired a fresh, exciting new energy. Christopher Bailey gave the once fusty line a sexy, modern edge and attracted a new generation of customers, including sexy young stars like Kate Bosworth and Blake Lively.

Christopher Bailey was honored at LFW 2009 as Designer of the Year. American Vogue’s Creative Director Grace Coddington was honored for outstanding contributions to fashion as a visual art. The ceremony, a glittering and fabulous event, was attended by models Kate Moss and Claudia Schiffer, celebrities and socialites.

London Fashion Week 2010 promises to be just as fabulous. Sponsored by Canon, Mercedes Benz, British Airways, MAC and BlackBerry, it will draw media from around the world and international celebrities to view 200 of the most creative British and international labels. Its venue will be Somerset House, an 18th-century neoclassical manor house meticulously preserved and dedicated to showcasing art and creativity.

Rush is keeping the guest lists under wraps for now. “The ‘front row’ is up to each designer and their PR,” she says diplomatically. “February will coincide with the BAFTAS [the British Academy Awards]; therefore, I am sure there will be an increased attendance of the film community at London Fashion Week.”

The New Generation and Fashion Forward presentations will be among the most closely watched and widely discussed shows, featuring the future of British fashion. Shows by designers Christopher Kane, Erdem and Marios Schwab are all “hotly anticipated,” according to Rush.

“British fashion is one of the UK’s highest profile and influential exports,” says Rush proudly. “I have no doubt it will continue to showcase talents and also hope we will be able nurture those businesses to grow into global brands.”