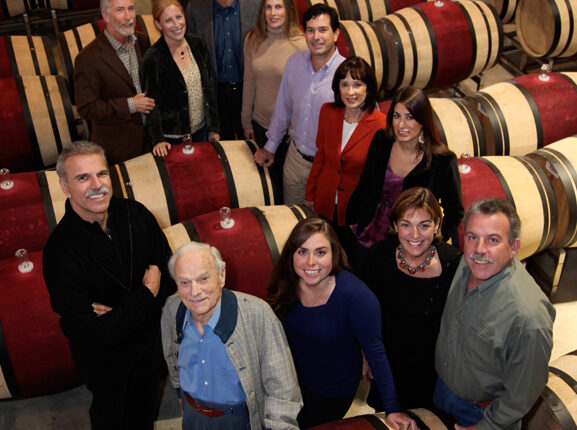 Warning: A non-numeric value encountered in /home/artandliving1/public_html/wp-content/themes/publisher/includes/func-review-rating.php on line 213
554
Share

21st-Century Napa: A Look At The Players Leading The WIne Capital of North America Into The Next Decade and Beyond

When you’ve been making wine as long as the Mondavi family has, it’s not just business, it’s about romancing the vine. The family, now in its fourth generation of winemakers, understands that memorable wines start with clean, healthy soil, an ideal climate and great tasting grapes.

“To be a great winemaker, you first have to have a great site. Then, you balance the vines to the site, the fruit to the vine, the winemaking to the fruit and ultimately, the meal to the wine,” says Tim Mondavi. He, along with his sister, Marcia, run Continuum, a Napa Valley winery that produces 1,500 cases a year. Four of Tim’s five children are currently playing an active role in its development.

His brother, Michael Mondavi, adds, “You have to do it with passion but be humble to know that Mother Nature is the boss.” Since 2004, Michael has produced family wines—such as M by Michael Mondavi and Emblem—and has imported great wines from family wineries around the globe with his new venture, Folio Fine Wine Partners. Rob and Dina, his children, also play an important role as winemakers.

Both men are the sons of Robert Mondavi, a name that has practically achieved rock-star status in the tight-knit world of winemaking. Robert’s first major accomplishment was to convince his Italian immigrant parents, Cesare and Rosa, to buy the Charles Krug winery, founded in 1861 in Napa Valley, for $75,000.

“I give credit to my folks,” says Peter Mondavi Sr., Robert’s brother. “They had little education, but they knew what to do. They were both strong and had desire.” The year was 1943 and, at the time wine was sold as a commodity, remembers Michael. Winegrowers sold their product in bulk by the gallon without an identity. Robert realized that the future of winemaking was in giving the public a quality product. “My father converted wine to a consumer product. It set us apart,” says Michael.

So began the Mondavis’ quest to create great wines. “The best wine has to have good mouth feel. It has to have a pleasurable smell, flavor and touch or feel,” says Michael. “It should leave the mouth pleasant.” Or, as Rosa would tell her children and grandchildren, a good glass of wine is one that invites people to have a second or third glass when enjoying a meal with family and friends. In four generations, the family has never strayed far from this ideal.

At Charles Krug, Robert and his brother Peter worked side by side, growing the brand for 23 years. Peter exhibited a profound gift for the science of winemaking and accomplished numerous winemaking firsts. He introduced cold fermentation process, which led the way for crisp, fruity white wines to become the standard in American winemaking.

He capitalized on the farming potential of the Carneros region at the southern end of Napa Valley, ideal for growing Chardonnay and Pinot Noir grapes. He was among the first to use cold sterile filtration techniques to remove spoilage microbes from wine and, forgoing American-made oak barrels, he began importing French oak for its more refined aromas and flavors.

Peter’s sons, Marc and Peter Jr., have continued the family winemaking tradition at Charles Krug Winery. They produce premium Napa Valley wines at the direction of Peter Jr. under the Charles Krug-Peter Mondavi Family label and use more moderately priced grapes to produce another label known as CK Mondavi. The family focuses on Bordeaux red grape varietals with the Charles Krug Napa Valley brand, while the Krug Family Reserve’s includes Generations, an elegant red Bordeaux blend, and the winery’s signature Vintage Selection Cabernet Sauvignon. The company produces 70,000 cases a year of which five percent is Family Reserve. Marc’s side of the business, CK Mondavi, recently hit a production high of a million cases.

While Peter Sr. has enjoyed being a part of the family business, Robert wanted his own identity. In 1966, Robert’s ambitions outgrew the family business. From scratch, Robert, his children, and one other employee started Robert Mondavi Winery. “We each had to wear many hats and learn how to grow and produce wines,” says Michael.

At the 1972 Los Angeles Times Vintners Wine Tasting, hosted by then-wine critic Robert Lawrence Balzer, the Robert Mondavi Winery Napa Valley 1969 Cabernet took first place. The wine’s success was a combination of the soil, the grapes and a superb growing season in 1969. Robert and his son, Michael, blended about seven percent of Cabernet Franc into the Cabernet, which was not a common practice in the 60s. “The added ingredient gave the wine more structure and elegance,” says Michael. “It was a stellar wine.”

The Robert Mondavi Winery Cabernet prevailed after fourteen winemakers tasted more than 20 cabernets from the 1969 vintage. Without the presence of French wines, there were doubters who said the results weren’t significant. The Mondavis knew better. “It gave us credibility,” says Michael. “I was on a two-day high.”

Marking Michael’s return to winemaking after 30 years, M by Michael Mondavi is a 100% Cabernet Sauvignon from his vineyard high atop Atlas Peak. Made in the style of the old California cabernets and classic Bordeaux First Growths, M by Michael Mondavi is elegant, balanced and approachable with bright floral notes, hints of current, spice dried berries and a touch of oak to smooth, bind and elevate the flavors.

In time, Tim assumed the role of winemaker at Robert Mondavi Winery from 1974 to 2004, overseeing the grape growing, the production, the innovation and research that positioned the Mondavi family wines on the world stage until 2004, when Robert Mondavi Winery was sold to Constellation Brands.

Tim’s Continuum label furthers the tradition of producing a superior single wine, committed to standing in the company of the world’s finest. The wine’s artistry can be seen in a blend of 59 percent Cabernet Sauvignon, 25 percent Cabernet Franc and 16 percent Petit Verdot, a red varietal that adds richness, thickness and density of color to the wine.

All the Mondavis have experienced home life on the grounds of the Charles Krug Winery. In high school, Michael would walk 100 yards from the house to the winery to clean tanks and wash barrels in the cellar. At the beginning of the harvest, Tim remembers throwing grapes high in the air and trying to catch them in his mouth. As his aim improved, his clothes had fewer grape juice stains.

Growing up in the wine business has played a great part in the respect and love of the land that “has continued on to the family’s fourth generation as it pursues sustainable growing practices and reinvents the role of winegrower. With so many conglomerates overtaking the California wine industry, at the Charles Krug-Peter Mondavi Family winery, this is one family that has remained independent,” says Marc, the eldest son of Peter Sr.  “We are not corporate employers; we are the owners and have a hand in anything that impacts the product.”

With the various ways that members of the Mondavi family have chosen to stay relevant and innovative in the wine industry, it’s clear that drive and passion still flow in their veins and in their oak barrels. It’s one of the great American success stories, with new chapters still being written.