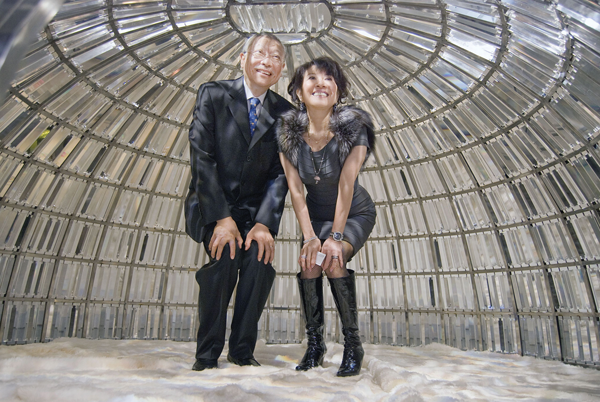 Warning: A non-numeric value encountered in /home/artandliving1/public_html/wp-content/themes/publisher/includes/func-review-rating.php on line 213
949
Share

In the heady world of art in Hong Kong, there is often more talk  than action or accomplishment. Fortunately, there Cissy Pao Watari, a visionary individual who works relentlessly without fanfare or hidden agenda, pushing through obstacles to make changes and reach milestones in the development of arts and culture.

With passion and focus, she worked for 10 successful years as Chairman of the board for the Hong Kong Ballet Co. and is now with the Hong Kong Arts Centre, bringing these institutions to new heights and setting the course for future development.

Cissy graduated from Washington University and Cleveland Art Institute with BA and MFA degrees in art history and painting/ sculpture, respectively. She lived in New York City, then Tokyo, as a painter and had many exhibitions in the United States and Japan. When she returned to Hong Kong in the nineties, she “hung up her brushes” and joined the family business to explore the business blood in her. She was invited by Mrs. Chris Pattern (wife of then-governor of Hong Kong) to chair the HK Ballet Co.

Though she thought she was going to do it for three months, she ended up staying with the HK Ballet for ten years. Now, she is still the chairman emeritus; four years ago she was appointed by the government to chair the Hong Kong Arts Center.

“When I was chairing the HK Ballet, I didn’t really know much about the ballet world like I know about the art scene,” reveals Cissy. “Nonetheless, I ran it like a medium-size enterprise. I had to first make sure it was financially sustainable, which meant constantly asking for government subvention, corporate sponsorship and individual donation!

Then, the second thing was the artistic direction, which had much to do with niche, playing with the pursuit of its unique character and, of course, artistic standard. The third, equally important element was the harmony and cooperation of the staff members. I was lucky that I was working with a great artistic director and CEO and a troupe of wonderful dancers of all nationalities. For both organizations, it was not all smooth running…I struggled a bit at the beginning then, once things kicked in, everything seemed to fall into place and the magic started flowing—at least most of the time!”

It was 1:00am Hong Kong time and Cissy was jetlagged from a weeklong trip to Italy, but you would never known that from her energy and enthusiasm as she spoke about HK Arts Centre’s latest exhibit, Popping Up—Revisiting the Relationship between 2D and 3D.

“My expertise lies in visual art.  I was a painter for many years. I did a little bit of sculpting too, because my work is very much two-dimensional and three- dimensional. It’s like a three-dimensional painting,” she explains. “It pops out from the wall.”

Although Cissy no longer produces her own art, her works helped inspire the concept for Popping Up. “The reason I thought of it is that I want to change the way that people look at things, change the way of thinking about art,” she says. “In the past, we thought about painting as two-dimensional; sculpture, three-dimensional. But these days, there is so much crossover. What happens in this crossover?”

“When you do something three-dimensional, whether it be jewelry, sculpture, architecture or fashion design, you generally conceive it on the 2D surface, then you transform that into 3D objects. So what happens between the 2D concept and the 3D?” Cissy asks, speaking about how sculpture has changed over the years. No longer is sculpture something that is always carved out of another 3D object such as marble or wood. “So many contemporary artists are using 2D materials such as metal sheets, paper, cloth and building with them. With the advent of new technologies, artists can create magical things.”

Combining her business savvy with her artistic eye, Cissy has brought in Van Cleef & Arpels as a sponsor of Popping Up, adding an exhibition area where Van Cleef shows their jewelry designs on paper and the dazzling jewels made from those drawings, allowing the famed jewelers to both support the arts and promote their gorgeous treasures. Cissy was also fortunate to find another co-sponsor for the exhibition, HSBC Private Bank, which will help to draw the attention from a wider audience. The works of more than ten artists from Hong Kong and other parts of Asia are featured as well.

Cissy is the third of four daughters of the late Sir Yue-Kong Pao, founder of Hong Kong’s Worldwide Shipping Group, once the world’s largest shipping company. While Cissy’s childhood was filled with luxury, it was also quite sheltered. When Cissy moved back to Hong Kong she realized there was a need to raise awareness and funds for the arts.

Because of her marriage to architect Shinichiro Watari, whom she met at college and with whom she has two sons, Cissy has learned a lot about architec- tural design and construction, which has proven to be very useful. She has transformed more than ten historic garden villas in Shanghai, proving that developing real estate can be its own art form. “The fun part,” she exudes, “is designing. I go to Shanghai,  I put on my jeans and sneakers and visit construction sites, looking like a total slob.”

One of her larger Shanghai development sites is Ferguson Lane, which maintains a bohemian, understated elegance and laid-back atmosphere. Shops at Ferguson Lane include the floral store Rosa Gallica, Leo Gallery, the Shui Urban Spa, Globus Wine, Wine Way, the Coffee Tree Café and the French bistro Franck, among others.

Cissy says that she has worked with different architects when transforming houses, but she’s adamant about not losing the essence of the original. “I want the old-world charm. Most of my houses are in the old French Concession. You’ve got the red-tiled roof, the arch windows. I want to keep all of those elements and add some modern elements, so the old has to work with the new.”

How the Guggenheim Is Restoring Two Pivotal Braque Paintings