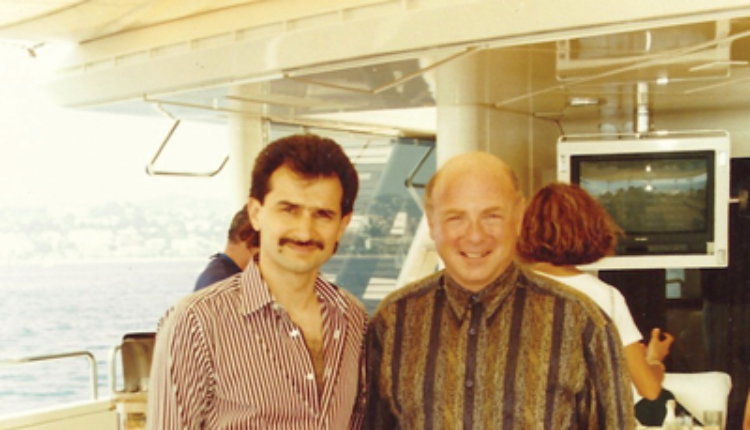 Hotelier Robert I. Small has been uncompromising about hospital- ity ever since he was a young kid of 16 working his first job at Greentree Surf and Tennis Club on Long Island Sound, in his hometown of New Rochelle, New York. “I would get this immense charge out of taking care of somebody,” Small says. “There was an immediate gratification from seeing the difference between right and wrong in reference to a guest or club member.”

His innate drive to take care of others, to notice the details, to remember preferences and make a good profit doing so, brought Small from New Rochelle to all reaches of the world. He is one of the great hotel executives of the last century. “Bob is charismatic and intensely passionate about extraordinary performance,” said Alan Fuerstman, founder and CEO of Montage Hotels & Resorts, whose career started as a bell captain at the opening of Rancho Las Palmas Resort under Small, whom he considers his mentor.

“He’s unconventional, not afraid to take risks, and never content with the status quo,” Fuerstman added. “He has that remarkable ability to inspire and motivate others to perform at their highest levels. He believes in people and gives them the confidence to believe in themselves.”

Small held important leadership stints that included the five-star Biltmore Hotel in Phoenix, Marriott Corporation, where, hand-tapped by founder J. Willard Marriott, Sr., to join the company, and eventually Small went abroad to manage the Amsterdam Marriott and later open what was to become the five star Rancho Las Palmas Resort before overseeing the company’s Western Region resorts, and then moved on as President and General Manager of the Bass family-owned Worthington Operating Companies.

Earning the nickname, “Five- Star Small,” he was recruited by Michael Eisner, CEO, Walt Disney Company to head up Disney Resort Division worldwide. He presided over Disney’s largest hospitality expansion, marked by the development and acquisition of resort properties and attractions in Florida, California and Paris. He broadened and elevated the hotel experience to world class level as well as expanding into the convention and business meeting market. Bob and Michael Eisner had a close working relationship. Bob said, “No matter what we did, Michael was always at the heart of the resort story, ranging from room design, housekeeping activities to food tasting.”

“Bob is highly respected in the hospitality industry as an innovative and outstanding leader” noted his good friend and distinguished architect Wing T. Chao, who was head of design for Disney Resorts and worked closely with Small. “Bob would say that hospitality business is ‘people business’ and he has tremendous love for people and great passion for excellence. His caring ‘high touch’ has touched thousands of guests and staff who have the good fortune of crossing paths with Bob.” The early ‘90s brought big changes in Bob’s life which eventually led him to join Fairmont Hotels as President and CEO.

Small’s parents were second-generation Americans, his grandparents having come from Eastern Europe. His father and older brother became oral surgeons, as did two cousins. But medicine did not interest Small. “My grandmother would cook,” he recalled. “And at a very young age I would taste it, and if it did not taste exactly right, to my absolute horror, she would throw the whole thing out. She had an absolute optimum of excellence in whatever she prepared, nothing less.”

Small has long benefited from having mentors. Among the first was Joe Baum, often called “the Cecil B. DeMille of restaurateurs,” who gave Small a job as a kitchen assistant for Restaurant Associates in New York, where Baum presided over a restaurant empire that included La Fonda del Sol, the Four Seasons and Tavern on the Green, among others.

In 1990 when Small was presented the prestigious Ivy Award for Excellence from industry publication “Restaurants and Institutions,” Baum present, sitting with Small’s parents. “He was all about theater, excellence, about price value,” Small said of Baum. “Early on he said to me, learn the fundamentals, be curious, ask questions, understand the nuts and bolts so as your career progresses, you will know the difference.

Small took the  advice to heart,  learning everything  in those early day s he could about  ordering, receiving,  storing, issuing and  prepping food. “Then  I learned the final  quadrant of that was service,” he adds,  “that you can do all  those things but if  the food does not come out right, all the things you have done right are wrong.”

From Baum’s empire Small was tapped to become food and beverage director of the El San Juan Hotel in Puerto Rico. He was 25. The hotel included a casino, seven restaurants, bars and a huge nightclub, where every week stars like Paul Anka, Sammy Davis, Jr., or Dean Martin would headline.

Small, obsessed with learning every aspect of the business and did not leave the resort for a year. “You either motivate people or they are not going to produce,” he said. “It is a responsibility you have of getting the very best of people, and you get the very best of people if you are sincere and you are honest. Walk the talk. Be available.”

While at Disney, this philosophy drove him to institute what he called Small Shifts, where he would work four hours a month in various departments. He keeps a photo of himself folding napkins in the laundry, where staff would fold 60 a minute. “I could do one every eight minutes,” he laughed. “The man working with me said, ‘Bob, thank god you are the boss, we would never have any napkins in the restaurants.’”

It was also while at Disney, his wife Carla just having given birth to their second child, Michael, that Small found out he had germ cell cancer. After open-heart surgery to remove a malignant tumor,  he remained hospitalized for six months, sure he was going to die.

“Did it make me more compromising in my thirst for excellence?” he asks aloud. “No, that did not change. I wanted to change my life but did not want to compromise my values.”

And thus he left Disney for Fairmont Hotels, after owner Mel Swig visited in the hospital and made him an offer. “I said, Mel I do not even know if I am going to live,” Small remembers. “He said, well if you do not live you do not get the job.” In 1991 Small spearheaded Fairmont’s turnaround. A few years later, HRH Prince Al Waleed Bin Talal made a significant investment and became Chairman of the company. Together with Bob, they boosted the restoration of all its hotels as well as the acquisition of New York’s landmark Plaza Hotel. “The successful turnaround could not have been accomplished without the leadership and support of HRH Prince Al Waleed Bin Talal.” says Small.

In the last decade, Small has been worrking with Native American tribes, figuring out ways to diversify into resort development. In his spare time he plays tennis regularly as well as serving on the board of the MD Anderson Cancer Center.

In his wallet, Small carries a tattered, handwritten note from a very important mentor in his life, J.W. Marriott, Sr., who rightfully saw so much potential in a young man just starting out in the hospitality business. “He was the greatest example to me, a hall of fame businessman, and, more importantly, a hall of fame human being,” Small concludes. “Because he cared about people, he told me ‘inspect what you expect.’ I hope I live my life that way.”