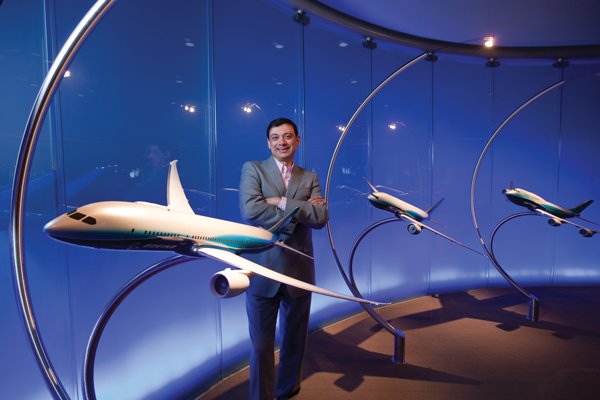 Capturing the Magic of Flying with Steve Haro

Warning: A non-numeric value encountered in /home/artandliving1/public_html/wp-content/themes/publisher/includes/func-review-rating.php on line 213
481
Share

Boeing’s Director of Brand Marketing Steve Haro is the first one to admit that traveling by airplane has lost some of its luster in the modern world. Yet Boeing, a longtime leader in commercial aviation, would have closed its doors long ago if it felt that the situation was hopeless.

Instead, Haro and the team at Boeing have been busy deter- mining how to inject a sense of exhilaration back into air travel. Their extensive and exhaustive market research is the basis for a series of design changes folded into a new aircraft christened the 787 Dreamliner that just went into service. The first aircraft of 55 planes is part of Japan’s All Nippon Airways fleet. According to Haro, demand for the Dreamliner has been thunderous with 800, planes on order from 57 countries. Several revolutionary features have been introduced into the 787 to bring the magic back to the commercial flying experience. With ongoing complaints about the cramped quarters typical of today’s air carriers, passengers are in for a big surprise when they first board the plane.

“It’s like walking into the main sanctuary of a cathedral,” describes Haro. Architectural techniques like a curved, vaulted ceiling and light sculpting with soothing blue-colored LED recessed lighting that feels like sky have been introduced to create a sense of “expansiveness”. The idea was to create a major transition from the hustle and bustle of the airport waiting areas to a welcoming environment.

Walking through the plane, passenger seating is roomier than on its predecessor due to an extra foot of width. Also, the windows have been made 30 percent larger and the window shades have been removed. The Boeing marketing team’s rigorous research revealed that most travelers around the world are still seduced by the sensation of flying and don’t want to be cut off from it. As a result, electronically dimmable windows mean that passengers won’t lose touch with the great outdoors.

“From welcoming entryways to larger windows, to vaulted ceilings with blue sky effects to cleaner air in the cabin, all of the plane’s features were designed to connect passengers to the magic that is the flying experience”, says Haro.

Many frequent travelers have experienced the challenge of spending hours in a moisture-challenged airplane. With the new design, those days are over, says Haro. Unlike today’s airplanes built from metal, which corrodes when exposed to the humidity and imposes limits on humidity inside a plane, the Dreamliner’s tube is made from a composite material. This is good news on several fronts for weary travelers.

The new structural materials won’t be affected by the additional humidity in the cabin, so passengers are less likely to experience the jetlag that is a common side effect of air travel. The new materials allow the planes to be pressurized to a cabin altitude significantly lower than airplanes in service today, another plus that will reduce nausea, headaches and fatigue in travelers.

In addition to filters for removing bacteria, viruses and fungi, passengers will appreciate a new gaseous filtration system that also removes odors, irritants and gas- eous contaminants, some of the primary contributors to throat, eye and nose irritation. The end result will be a passenger who arrives more refreshed by the end of the journey.

The most impressive bit of technology built into the design that may just send whoops and hollers up and down the corridors of airline terminals everywhere is the addition of the gust suppression system. Simply put, computer sensors can identify pockets of air and make adjustments to the airplane’s pitch to eliminate a majority of turbulence during a flight. It sounds more like science fiction than reality.

Then again, Boeing has had a long and enduring place in the history of aviation and innovation is at the core of its success. Close to a century ago, Bill Boeing started his company, inspired by the historic work of the Wright Brothers. His first contracts provided trainer airplanes for the U.S. military.

From there, Boeing made planes that provided cross-country mail service and later, as a natural progression, expanded to commercial air travel in the 1920s and ‘30s. Founder Bill Boeing even started United Airlines, a clear sign that the company’s not about to run away from a good idea.

So confident has Boeing been about the new 787 design since the earliest stages, that it decided to let the public in on the fun by staging a naming sweepstakes

for the new aircraft. After running a contest on AOL in six countries with the winner earning a trip to experience a Boeing simulator, the voting came down to two names: the Global Cruiser and the Dreamliner, as approximately 500,000 people voted.

Now, as the company is on the cusp of delivering its new airplane, it’s all designed to capture the excitement of an earlier time. Writers of travel blogs are buzzing excitedly that they can’t wait to take their first flight on the Dreamliner, according to Haro. Indicators like the Internet show that the new design has caught on with the public and that Boeing’s research has paid off. For now, the future of flight is in good hands.

Marc Raibert is the founder and CEO of robot maker Boston Dynamics.