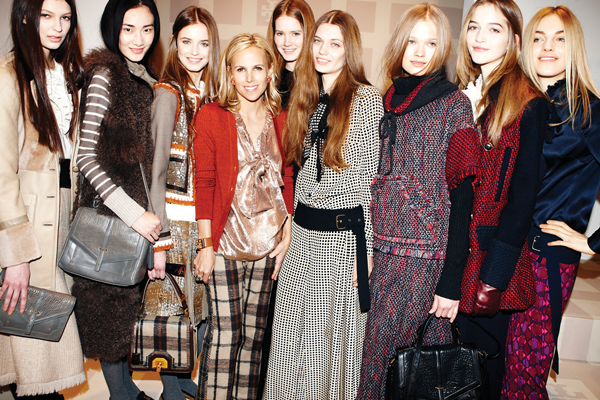 Young, beautiful and successful, Tory Burch is the “It” designer  of the fashion world. Born and raised in Philadelphia, Tory graduated from the University of Pennsylvania before moving to New York to pursue a career in the fashion industry. She worked as an assistant for Harper’s Bazaar and in public relations and marketing at Ralph Lauren, Vera Wang and Loewe.

In 2004, Tory launched her  own fashion brand with several categories and a retail boutique in New York. It was an immediate sensation, nearly selling out on opening day during New York Fashion Week. Just one year later, she was invited as a guest on the Oprah Winfrey Show, where Oprah introduced Tory as “The Next Big Thing in Fashion.”

Since its launch, Tory Burch has received recognition from the fashion industry—The Rising Star Award from The Fashion Group International in 2005; Accessory Brand Launch of the Year from the Accessories Council of Excellence in 2007; and the CFDA for Accessory Designer of the Year in 2008. Tory was also named one of Forbes’ Most Powerful Women in the World in 2010.

How did these awards come about so quickly? Tory always was, and is, tuned into the  looks that women want. She taps into the essence of single women, working women and soccer moms, a unique talent and a flourishing one. Saks Fifth Avenue, Bergdorf Goodman, Neiman Marcus, Bloomingdale’s and hundreds of luxury stores worldwide carry her lifestyle collection, which includes ready-to-wear, handbags, shoes, jewelry, small leather goods and eyewear.

Success has not turned the head of this mother of three children. The company is committed to global expansion, with 39 boutiques in the US and 12 internationally. Recently, its focus has been on Greater China. Tory Burch opened Hong Kong boutiques at IFC and Harbour City in December and April, respectively, and both were instant successes.

The company also opened its first boutique in Mainland China in Beijing this past May, which was its 50th boutique worldwide. These three boutiques are solely owned and operated by Tory Burch, a noteworthy feat for a relatively young brand in this market.

“Launching in Beijing and Hong Kong is a significant and exciting step for our company,” said CEO and designer Burch. “We look forward to building a long-term business there and hope this is just the beginning of many things to come in Greater China.”

Tory’s unique and luxurious lifestyle concept is embraced by women everywhere. The brand embodies the personal style and spirit of Tory—classic American sportswear with an eclectic sensibility—which many women aspire to emulate. Tory has always been her own best model; she is not only a chic style setter but also a philanthropist and savvy businesswoman with a clear passion for what she does. It’s no wonder that many of the most stylish Asian women—and women all over the world—are drawn to her collection and boutiques.

There seem to be no limits to what Tory can do. While the company has seen early success in Asia, this is the just the start of its journey there. Future plans include opening additional boutiques that are solely owned and operated by the company, including free-standing stores in Hong Kong, Mainland China, Macau and Singapore. There is even talk of opening flagships in both Hong Kong and China. Many brands discuss opening various international stores, but true to its dynamic style, Tory Burch is entering Asian markets strategically and carefully and garnering an enormous response.

It is this global appeal that draws fans like chart-topping musician and producer Kanye West to the Tory Burch Fashion Week presentation at Lincoln Center. Celebrities and customers alike admire Tory’s leadership, personal style and forward-thinking approach. Her collection is aspirational, but it sells, sells, sells. This unusual combination makes Tory Burch fashion’s “It” designer.