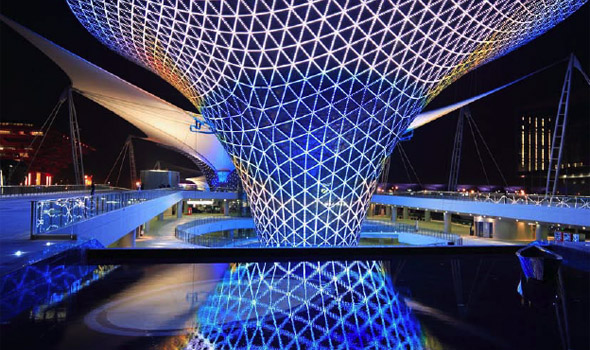 A Word from Frank Lavin

Now the Expo is here, and it is an important event for both China, America, and the world. The Shanghai Expo could prove to be the greatest combination ever of museums, exhibit halls, theaters, amusement parks, scientific displays, pageants, and cultural performances. It will be the largest World’s Fair in history, in terms of number of exhibitors (over 240), amount of acreage (over 1,200), and number of visitors (projected at over 70 million). Since the Fair runs for six months, this translates into a daily attendance of around 400,000. Put another way, it is one Woodstock a day for approximately 180 days.

Anyone who followed the 2008 Beijing Olympics understands that China does not embark on major initiatives lightly. This Expo is a national project, one that commands the full attention of the Beijing Government–with the Director General of the Expo Authority accorded Cabinet rank. The cost of the entire Expo undertaking will run over $45 billion, a staggering figure for urban redevelopment. But after all, the 70 million fairgoers will make this six-month event not just the largest-ever World’s Fair, but also the largest gathering in human history.

This Fair is an opportunity for China to make a statement about itself to the world, and to its own people. The Expo will allow China to illustrate its national pride and strength to its citizens, as 90 percent of the 70 million fairgoers are expected to be Chinese. It will also provide foreign visitors with memorable experiences and lasting impressions of China as the host nation puts all its effort into welcoming the world.

On a personal note, every time I visit China, I see a nation that is hungry to learn more about America. This Fair is a chance to share our values, our products, our ideas, and our culture. In short it is “soft power” at its best, and that is the reason why Secretary Clinton has taken a leadership role in turning the USA Pavilion into reality. The logic here is that the values Americans cherish are in many respects universal values, shared by people around the world. President Obama touched on this message in November 2009 when he told a group of Shanghai students that “it is that respect for universal rights that guides America’s opennness to other countries; our respect for different cultures; our commitment to international law; and our faith in the future.”

One survey about the Expo showed that the USA Pavilion is expected to be the most popular foreign exhibit for Chinese fairgoers, second only to the Chinese Pavilion. World Fairs are enshrined in American consciousness, but with 64,580 sq ft (6,000 sq m) of history, technology, and culture on display in China, the USA Pavilion looks forward to treating Expo guests to a new, defining 21st-century experience.

Beyond that, it is important to keep in mind what the Fair is not. The Fair is not a policy mechanism. It is not a platform for trade negotiations, though it will see the introduction of new products. It will not solve human rights issues, though it should strengthen the discussion. It will not guarantee agreement on environmental issues, but it will certainly increase awareness.

Whatever complaints or criticisms one has regarding China before the Fair will probably be in place when the Fair is over. But maybe we will have chipped away at some of these issues. And maybe at this largest peaceful gathering of nations in history, we will have all had the opportunity to learn a few things as well.

America has come to Shanghai proud of our story, humble in awareness of our shortcomings, willing to learn from others and share experiences, and most of all, ready for fun.

We hope you enjoy the Fair and your time at the USA Pavilion!

A Cast of Thousands