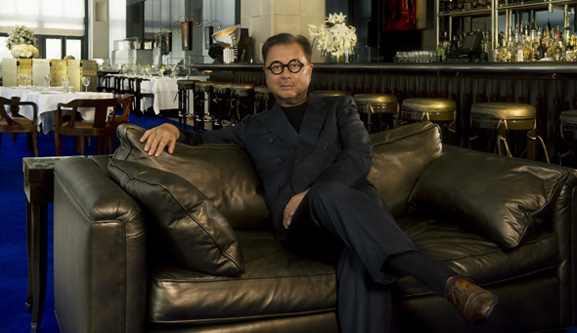 Warning: A non-numeric value encountered in /home/artandliving1/public_html/wp-content/themes/publisher/includes/func-review-rating.php on line 213
542
Share

This legendary creator, at once introspective and visionary, has intrigued the world most famously with upscale, innovative culinary dishes at his Mr. Chow restaurants in Britain and the U.S. With his finger on the pulse of luxury, he sets the bar so high that only a handful can be called peers.

The Chow name is a gold standard. “Hermes is top quality of all things in the world,” says the eminent businessman. “That is what we aim to be—that level of perfection.” His restaurants achieve that with one-of-a-kind dishes, outstanding ambiance, and top-notch service.

As a Chinese expat, his lifelong passion has been to educate the West about the cultural richness of his homeland and to expose Westerners to Chinese food beyond white carton boxes. In 1969, Chow opened his first Mr. Chow in Knightsbridge, London with the mission of delivering trendsetting, fine-dining cuisine. His was the first restaurant to offer Chinese food in refined courses served by well-trained employees. “I wanted Chinese culture to have respectability and acceptance,” he says.

Thereafter, he set his sights on revolutionizing Chinese food in America. A Mr. Chow New York was followed by outlets in Beverly Hills, Las Vegas and, most recently, Miami. Modern, healthful dishes and the traditional art of hand-pulled, on-site noodlemaking continue to attract A-list diners.

Along the way, he has fought to quash dubious Western stereotypes about Chinese culture and cuisine. “There is still a certain racism to it all,” he says. “I have been fighting my entire life to promote China to the West. Critics have not taken Chinese food seriously. It’s not something to make fun of. Critics always give great respect for French wine but, when it comes to Chinese food reviews, they can’t even tell the difference between Cantonese and Beijing foods.” Make no mistake; Mr. Chow serves Beijing fare.

Chow was born in 1939 in Shanghai to a wealthy, respected family. His father was a famous opera star from Beijing; his mother’s family made its money in tea. His parents wanted the best life for their son so, at twelve years old, they sent him, alone, to a British boarding school. Chow never saw his father again. His mother could only visit once, as his family faced hardships at home. “I lost my parents, my country and my background all at once,” reveals Chow, admitting the experience instilled in him strength and confidence that has served him well over the years. “You need a certain passion. It can be given to you by tragedy—then you must turn tragedy into positive,” Chow says. “God gives you this to see what you’re made of. Tragedy always creates an inner drive.”

His history has influenced him, but it’s his artistry that defines him. “It wasn’t easy but, today, I consider myself an artist first,” posits Chow. “All in all … an artist first, a Renaissance man—someone with a personal, internal desire and need to promote the greatness of China to the Western world.”

Such is the role of Chinese Americans, Chow says. “I have the best of both worlds,” he details. “I don’t dwell on being Chinese American. I don’t focus on the negativity—the suffering of the Chinese people due to war, flooding and devastation—they have gone through a lot of suffering. So I say, focus on the positive, especially in today’s emerging Chinese climate.” He continues, “We would like the two worlds to live in harmony … and with understanding comes acceptance. The West still does not accept China the way I would like.”

Much of Chow’s huge success can be attributed to the creativity and drive of his wife, Eva Chun, who works by his side, step-by-step in each creative undertaking. “My wife and I have been on duty for four months, 24 hours a day,” says Chow of the 2009 opening of his latest restaurant in Miami.

Now Chow looks forward to his next big project. “I want to complete a film I have written,” he divulges. “It’s about my life story starting in China. I will direct…It’s a low-budget bio epic.” Hollywood producers, take note.

Finally, what of those George Burns-esque spectacles? Says Chow, “It’s always good to have a trademark dressing, something for people to remember you by.”

A Word from Frank Lavin

Cook: What it Takes to Make It in Josiah Citrin Michelin-Starred Restaurant –…