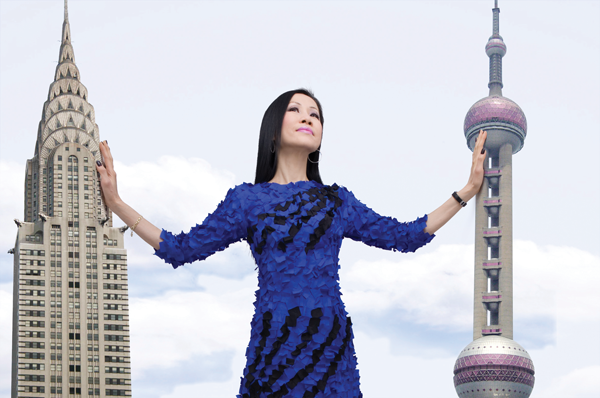 Chiu-Ti was born the second daughter of a newspaperman and a successful corporate sales executive in Kaohsiung, Taiwan. She began writing for her father’s newspaper at the age of eleven and has since studied and worked as a lawyer, a writer, a business developer, an art collector, and more. “I have a great‘Renaissance’ interest,” Chiu- Ti states in her Tribeca offices over handmade red bean cakes and iced mint tea. “I am all about multiculturalism.”

Fluent in Mandarin and English and conversant in German French and Japanese, Chiu-Ti studied literature at National Taiwan University; literature philosophy and art history at Yale; and later earned her J.D. at Columbia. “I have the existential impulse to be in more than one place,” she explains. Chiu- Ti now possesses a collection of international contemporary art that contains the works of German painter Stefanie Gutheil, American photographer Angela Strassheim, and Chinese prodigy Chi Peng. She also helms the nascent business and media firm China Happenings, an international outfit that partners with Western companies and life- style brands seeking to expand into modern China and Chinese businesses seeking access to Western capital and know-how.

In a world where “multitask ing” often means little more than texting and sending e-mail at the same time, Chiu-Ti is a rare individual who works successfully across a dynamic range of skill sets and even careers.

She began her Wall Street career in the mid-1990s working as  a corporate lawyer and briefly  an investment banker. Working simultaneously in securities offerings, mergers and acquisitions, and private equity, Chiu-Ti became the first Asian lawyer to achieve the lofty rank of partner in the New York headquarters of LeBoeuf, Lamb, Greene & MacRae, the predecessor to Dewey & LeBoeuf, a prestigious Wall Street firm known for its work in the financial industry. It was during the same decade that Chiu-Ti emerged as a serious collector of contemporary art. “When I was a lawyer collecting art, I felt like I was living vicariously through the artists,” she admits.

Chiu-Ti’s decision to collect contemporary rather than classical art was fueled in part by the sense of risk inherent in inhabiting a realm where “there is no critical discourse to help you choose.” In this way, Chiu-Ti’s criteria for selecting contemporary art mirror her approach to identifying viable business partnerships.

Just as her choice of art reflects an intellectual approach matched with a highly personal aesthetic, so her business endeavors rely on her ability to combine rigorous due diligence with an acute sensitivity to the needs and motivation of the people involved. “One needs to go beyond abstract paperwork and feel by intuition,” she observes.

“When I work on a project, I like to bring together partners with complementary business models and technologies,” the multi- talent relates. In a departure from traditional Sino-foreign partnerships, in which counterparts in the same industry typically work together, Chiu-Ti seeks partners with differing but compatible interests. This approach allows her to creatively balance the needs of the parties involved and helps to resolve the “underlying competitive tension” inherent in a relationship in which the parties are “natural competitors.”

“Fundamentally, business, as life, is about people,” Chiu-Ti observes. As in Chiu-Ti’s life and art, China Happenings’ roster of projects is notably diverse. China Happenings is currently nourishing a private brand hospital and medical city project in the up-and-coming Tongzhou a satellite city east of Beijing and has also partnered with international interests to grow China’s general aviation industry, a burgeoning field in which private aviation alone is projected to grow by more than 20% annually for the next decade. Chiu-Ti is also working with multiple cultural institutions and art-related concerns in establishing brand-enhancing strategic partnerships in China.

“I believe China is the happening place,” Chiu-Ti comments. “It’s happening so fast and at such a condensed pace that it has a sense of urgency.”

Still, she is aware that shaping the perception of modern China is as much a business concern as forging strong business partnerships there. “Everyone is always looking for the ‘pure China’,” she relates, asserting instead that “there is no pure China.” She  also describes the “Two China Syndrome,” a problematic binary perception of China as either an outmoded producer of cheap plastic toys or a fast-growing world leader where mobile TV is already a part of everyday life.

Energized by China’s possibilities, Chiu-Ti points to recent launches of Chinese lines by luxury brand Hermès as well as popular brands like Levi’s as signals that world culture and economics are changing right before our eyes. Similarly, “there is a widespread desire in China to return to a civilization known for its depth of culture,” she comments. “Domestic consumption, especially in products and services that improve lifestyles, is expected to drive the next wave of growth.”

When Chiu-Ti Jansen launched her monthly column “China Happenings” with the New York Observer Magazine in March this year, she chose to write first and foremost about “A New Yorker’s Encounter with Contemporary Chinese Art.”

For Chiu-Ti, the column is a harbinger for the books and TV shows in the works by CHINA HAPPENINGSTM, a multimedia and advisory platform founded by her to focus on the lifestyle and cultural industries of contemporary China. As she so presciently comments, “Whoever controls the economy would have the tool to control the style and culture.”

Pearl Lam: Sharing the Beauty of Chinese Contemporary Art with the West