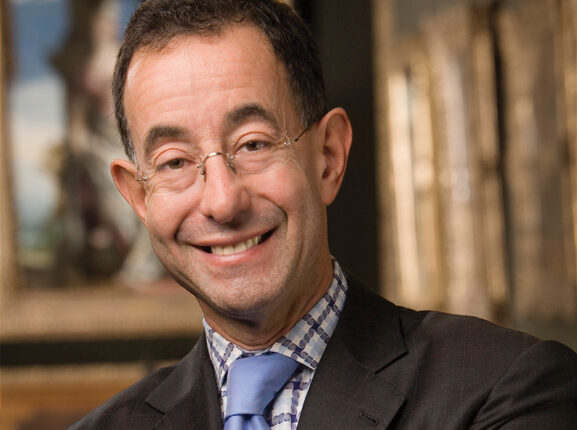 We were discussing wish-list acquisitions, as do all curators and directors. “Then, I’d like us to own a Rubens and a Delacroix. The Frick is a treasure house of the greatest works and these artists are part of that canon, but for whatever reason are not represented in our holdings,” he adds. Such is the dream scheme of Mr. Bailey to make the jewel of the museum world—The Frick Collection—even better than it already is.

Opened to the public in 1935 after Mrs. Frick’s death four years earlier, the museum was the home of coke and steel magnate, philanthropist, and art collector Henry Clay Frick and his family. The mansion, reminiscent of the grand noble houses of Europe, was the ideal setting for Mr. Frick’s collection of masterpieces, which encompassed work from the Renaissance through the 19th century. Mr. Frick willed the house to the public with a large endowment that today covers 50% of the annual operating expenses.

With his dashing patterned socks, charming personality and impeccable manner, Bailey cuts a most handsome figure and consummately fulfills the roles of associate director and chief curator of the Frick to perfection. The scholarly books and catalogues he has authored and edited have set him apart and have garnered awards, notice and raves.  He won 2004’s prestigious Mitchell Prize for best art history book of the year for 2002 and 2003, and he is an acknowledged authority on Renoir.

“The Frick’s Fragonard Room houses the greatest collection of Fragonards in the world,” Bailey points out. He is proud of the space’s newly installed lighting, which displays and illuminates the eleven panels ideally. “One of the great satisfactions of working at the Frick for eight years is to find oneself functioning as part of a team of such seasoned and excellent professionals—professionals who grow, develop, and are challenged by maintaining our signature standards of quality in presenting a collection that is so beloved and enjoyed,” Bailey remarks.

Born in London in 1955 to parents who were not involved in the world of art, Mr. Bailey read honors in modern history at Brasenose College, Oxford, where Professor Francis Haskell inspired him to pursue postgraduate studies in French Painting from 1800-1880. He was awarded a fellowship to the Sorbonne and obtained his doctorate from Oxford. Later, he held positions at The J. Paul Getty Museum, the Philadelphia Museum of Art, the Kimbell Art Museum, and, before coming to New York, the National Gallery of Canada, where he was deputy director and chief curator.

Bailey was honored to be named one of ten fellows from a pool of 50 considered by the Center for Curatorial Leadership, which affords leadership training and prepares curators as future museum directors.  Mentored for approximately four months by Emily Rafferty, president of the Metropolitan Museum of Art, Bailey then held a residency under Henri Loyrette, president and director of the Louvre.

When asked what would be his “dream exhibition,” he replies without hesitation, “An exhibition around Renoir.” Coming from a Renoir specialist who spends his days in a museum that happens to have on view a particularly stunning example, Mother and Children, this makes perfect sense.